The return of shorn lambs to Wagga brings 600c/kg prices 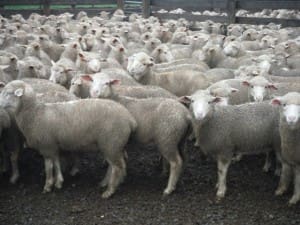 These 14.3kg cwt White Suffolk-Merino cross lambs were sold by the DT Kenilworth Partnership at Campbell Town for $96 through Elders Launceston on AuctionsPlus on Thursday.

The strength of Australia’s prime lamb market was highlighted mid-week with prices tipping 600c/kg at Wagga and holding firm at Hamilton in the face of the city’s largest yarding for the year.

Lamb prices in most saleyards mid-week regularly exceeded 520c/kg cwt for quality trade and heavy lambs and went above 300c/kg for sheep.

On Wednesday, Hamilton yarded 49,693 mostly good quality lambs, with rates for trade and heavy lambs starting back slightly, but finishing firm within a range of 465c/kg-540c/kg cwt.

Hamilton saleyard manager Chris Dahlenburg said this week was the city’s biggest for livestock this year – with about 94,000 sheep and lambs, 1500 cattle and 163 horses being sold.

At Wagga on Thursday, keen domestic and export processors bidding for top supplementary-fed shorn lambs pushed rates to new levels, with the NLRS summary sheet and report indicating trade and export weight lambs made 600c/kg cwt and more at times.

Landmark Wagga livestock manager Peter Cabot said he knew of at least one line of pre-weighed lambs that made 596c/kg cwt.

“The sale was very dear… there were lambs there making $6 dollar a kilogram and sheep were making well over $3 a kilogram (cwt).

“They were absolutely magnificent lambs – I’ve been here 15 years and I’ve never seen our lambs as good,” he said.

“Bernie Noonan has been here 50 years and he said ‘Mate, this is as good a run of lambs as we’ve had through here’.”

But Mr Cabot was cautious about drawing conclusions from the Wagga rates, because of the number of lambs already locked into forward contracts.

“The most I have ever sold lambs for is $6 a kilogram (cwt) in 20 years and I would be reluctant to think that we are going to keep getting that.

“There is no way known the bottom is going to fall out of it, but $6 a kilogram is the most I’ve ever sold them for and that’s what they were making yesterday,” he said.

“Our shorn lambs that were making $160 weren’t that heavy.

“These aren’t 30 kilogram lambs making this.”

He had lambs contracted to a supermarket for 530c/kg cwt, but the supermarkets were also paying producers “half the upside” if saleyard prices were better than the grid price.

“We’ve got plenty of lambs locked in at $5 – people took it.

“I think rates will remain at between $5-$6 a kilogram cwt.”

The NLRS said lamb quality remained good for trade and heavy lambs. There was a reasonable number of light secondary lambs but not as many as last week. There were good numbers of heavy trade and heavy lambs and most were new seasons. All the usual buyers operated in the dearer market.

Mutton numbers also eased and quality was very good. Ewes gained $4-$8, while a very good run of heavy wethers sold to a much stronger trend. Medium weight ewes ranged from $65-$85 and heavy weights made to $92. The large runs of Merino wethers topped at $110.50. Most averaged 320cc/kg-360c/kg.

Heavy lambs to 520c/kg at Goulburn

The NLRS said most of the lambs were light and trade weight new season lines. There was also a handy selection of well-finished heavy weights, along with a few more shorn young lambs. Lambs dry in the skin or showing signs of seed infestations were discounted in a strong market where buyers favoured well-finished lots.

It was a similar mutton offering with most categories represented. Demand lifted and prices averaged $3-$6 dearer.

The NLRS said lamb quality was mixed, with more trade lambs showing dryness and lacking finish. There were more supplementary-fed young shorn lambs, offering buyers weight and yield, which contributed to the dearer trend. The usual contingent of domestic and export buyers competed in a dearer market. Secondary lambs suitable to restock or feed were well-supplied and sold to strong local competition.

Bidding was strongest for well-finished shorn trade lambs, helping to lift prices $6. Light trade lambs to slaughter were keenly contested by major domestic processors, with the very neat lambs selling at 600c/kg cwt. Most of the better light trade lambs averaged $117.20. Medium and heavy trade lambs benefited from stronger demand from all buyers, selling $12 dearer to average 560c/kg-570c/kg cwt. Light immature lambs met with stronger competition from producers looking to accumulate lambs to place on stubbles. The plainer conditioned lambs made from $56-$75. Well-bred secondary lambs returning to the paddock averaged $85.80, while lambs to feed on topped at $107. Heavy export lambs were in reasonable supply and sold to stronger northern competition. Heavy and extra heavy lambs sold from $138-$170.20 to average 548c/kg cwt.

Mutton quality was quite good. Merino ewes suitable for the trade were in reasonable supply, and prices were $5 dearer. Light sheep were in limited numbers and prices were mostly unchanged. Heavy sheep were well supplied and not all northern processor competed as strongly as the previous sale. Heavy crossbred ewes sold $10 dearer to average 310c/kg cwt. All weights and grades of wethers were represented and prices ranged from $60-$107.

Restockers were very selective with their purchases. Well-bred young ewes returning to the paddock made from $91-$121.60.

In Victoria at the Hamilton saleyards on Wednesday, the agents yarded 49,693 lambs, 464 more than at the previous Wednesday’s sale.

The NLRS said lamb quality was very good with many pens of well-bred light lambs offered. The increased numbers of southern lambs again provided the best weight and condition in the excellent line-up and sold to more competition than the drier skin types.

Demand was steady from the largest gathering of processor and restocker buyers, especially early in the market as trade and store buyers competed strongly to briefly increase prices in most weight ranges. However, as the sale progressed, prices started to ease a little to finish mostly unchanged, even a fraction easier at times.

Competition for the lighter lambs was evident as buyers travelled from the Wimmera, South Australian border, Murray, and Bendigo regions. This, combined with some local interest, saw prices lift $3-$5 in the light weight classes. Demand for the medium trade weights was around the same mark as the previous sale. The heavier trade and export lambs were slightly cheaper, back $1-$2, but as the sale progressed the better lambs sold strongly for prices to be firm on last week’s rates.

The NLRS said lamb quality was mixed, though more well-presented shorn young lambs were yarded for the usual buyers. They sold to solid competition with the heavier lots making $126-$143.50, to average around 540c/kg cwt. Restocking activity was limited to a few pens of woolly and shorn lambs selling from $70.50-$100. Light weight 1 and 2 score lambs sold from $76-$85. Light trade 2 and 3 score lambs sold from $87- $108.50.

The sheep penning included many pens of heavy Merino wethers and ewes plus crossbred ewes. They sold to steady competition from the usual buyers plus some extra competition to be firm to a few dollars dearer.

At the Hamilton saleyards on Thursday, the agents yarded 23,485 sheep, 5096 more than last week.

The NLRS said ewe quality was mixed in Hamilton’s largest sheep yarding for the year as producers culled ewes after selling lambs. There were some good quality runs of prime Merino wethers that sold to stronger competition from the full field of buyers. The buyers continually competed strongly to obtain mutton, lifting prices in all weight ranges. Restocker activity was very limited with only one local occasionally operating.

The NLRS said the usual trade buyers were present and there was the normal restocker support. Overall quality was good, although there were large numbers of light weight lambs with some showing signs of the dry season. Prices generally improved with the lighter end of the market improving the most.

Firm prices for sheep and lambs at Katanning

The NLRS said there were reasonable supplies of prime trade lambs along with lighter weight and conditioned drafts. Competition from a full field of buyers kept prices firm, with live export, restockers and feeders all active on lighter conditioned categories. Prices firmed as the sale progressed and buyers increased competition to secure adequate numbers.

Prices for most ewes were firm. Light ewes were marginally dearer, from $35-$65 and 2 score ewes to processors made $50-$81, for a $67 average, equal to last week at 295c/kg cwt. Better 3 and 4 score ewes, including heavy weight drafts, sold from $67-$85.50, to remain equal at close to 295c/kg cwt. Restockers purchased mainly young and light weight ewes, paying $35-$83. Wether prices were firm, with solid live export interest for the small supplies available. Heavy wethers made $80-$96.50 with lighter and store drafts from $50-$88, equal to last week. Rams also sold well, with young drafts to live export and feeders making $40-$68 and old rams selling to processors at $5-$30.