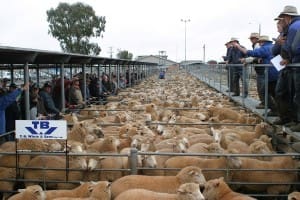 Post-Easter saleyard markets opened firm to dearer for quality trade and export lambs yesterday, but the bigger news was the release of the season’s first forward export contract leading into winter from Thomas Foods International.

TFI national livestock manager Paul Leonard said the 18-34kg contract is for 560c/kg for lambs delivered into Tamworth, NSW, in May, 570c/kg in June and 580c/kg in July, with a 50 percent upside relative to TFI’s grid of the day, with no downside.

At Murray Bridge and Lobethal, SA, the 18-34kg contract price is 560c/kg in May and 570 in June, and Lobethal is 570c/kg in July, with the same upside/downside conditions. TFI’s Murray Bridge works will be closed for most of July.

The contract was released on Tuesday this week and it closes at Friday, April 10, at 10am, with “live” booking direct with local TFI buyers to allow appropriate matching of consignments to lamb kill capacity at TFI works over the contract period.

“We’ve allocated so many lambs for each day of our kill over that period, so it will be done live.

“It will close at 10am Friday because those that want to get in will be in and have been allocated a date.”

Mr Leonard said the new system will allow producers and agents to get real-time bookings and hopefully access to their preferred kill dates and times.

Mr Leonard been pretty well supported in the north and the south so far and given producers the incentive to shear lambs and put weight into them up to 27-28kg cwt.

“The uptake through NSW’s New England area has been pretty good so far, given they had that rain 4-5 inches over Easter which has probably secured that area to be able to put weight into lambs with confidence.”

There has also been significant response in SA, for mid-May delivery, he said, potentially easing producers’ concerns about lambs that might cut their two-teeth after late May.

Mr Leonard said the contract will also help determine what lambs are still available, but he urged producers to be cautious about regarding a forward contract price as an indication of future physical or saleyard market price levels.

“I think it (the TFI contract) will give confidence to the market, but what people have got to understand is that just because somebody puts out a forward contract, don’t take it as that’s where the job is going to be.

“For us it is about securing a percentage of our kill,” he said.

“Do I know where the market is going to be in three months’ time? I have no idea, so don’t take it as a gift that this maybe the bottom or the top of the market – it is simply a forward market price.”

He said TFI had allocated a percentage of its kill to the contract lambs and would continue operating in the physical markets in coming months.

Elders NSW livestock manager Paul Jameson said there was rain over Easter of 28-40mm around Dubbo, over 40mm further north and 50-60mm in the southern central west region into Tamworth and Gunnedah, though areas further west and north missed out again.

He believed the rain helped lift rates at Forbes yesterday, though there might have been an expectation of a bigger improvement, as indicated by the yarding size – 22,650 lambs and 4350 sheep. Mr Jameson expected that with follow-up rain the saleyard market prices might rise to match the forward contract rates in place. The TFI contract follows Coles’ May delivery contract of 580c/kg for 18-25kg lambs.

Mr Jameson said there had been reluctance to sow oat crops for livestock in the central west area due to the locust threat.

“But I think these falls of 20-40 mm in that area will get a few blokes on tractors to put some feed in, but they are still a good six weeks away from having any forage-type feed for lambs.”

He said most of the good lambs being marketed now are coming off grain. Farmers with lambs on feedlot and sowing crops after rain would probably continue to feed lambs for later crop-finishing, he said.

“I reckon there is enough money to give them a bit of confidence to hang in there for a little bit.”

At Forbes, VC Reid and Son agent Scott Reid said light lambs sold $6-$10 dearer, but heavy lambs was not much dearer than last week, possibly $2-$3 up, with trade lambs $4-$6 dearer.

He believed processors should be worried that lamb numbers in the area will decline going into winter.

“Which they will, I think a lot of lambs were sold in this area from spring to Christmas that normally would have been shorn and put away for later on.

“And the price of store lambs for the past six months hasn’t been really cheap,” he said.

“There hasn’t been a lot of lambs put back out in this area.”

Mr Reid said it will be interesting to follow the hook prices in the next six weeks, but he expected the recent rain will ease stock turn-off making supplies harder to secure.

“It will have an upward effect on the market, I’m sure.”

In Victoria, the NLRS said the majority of contributors left lamb over-the-hook rates unchanged this week. No trend has been reported due to a contributor not quoting this week. Mutton rates were firm across all categories.

In SA, the NLRS said trade and heavy weight lamb rates were 3c/kg cwt lower this week on average, while light weight and Merino lambs remained unchanged. Mutton rates fell an average of 23c/kg cwt across all categories.

In WA, the NLRS quoted over-the-hook lamb rates as unchanged, while the mutton rates lifted by 28-35c/kg.

Tasmania’s over-the-hook rates for mutton and lamb were left unchanged this week, according to the NLRS.

Despite wet conditions, the NLRS said lamb quality was similar to previous sales, with well-finished and plainer lambs penned. Most were heavy and extra heavy lambs. The usual buyers competed in a dearer market.

The NLRS said the usual buyers operated and showed a preference for the well-bred and finished lambs, with demand for secondary types mixed.

A feature of the yarding was a line-up of extra heavy lambs from the area’s renowned red-soil potato growing country, with agents rating it as the best display of export lambs offered at the saleyards this year.

Selling agent TB White and Sons sold 1187 lambs from $150-$180, with a line of 160 Poll Dorset cross lambs estimated at 34kg cwt from Rumler Partners at Wattle Flat making the top price. Principal Bill Rumler sold lambs for up to $184 this season, was happy with yesterday’s price. He said his fodder crops were failing and a break was needed.

“We need a break now, but it has been a good year to fatten and grow out lambs.”

The NLRS said export lambs averaged $6 dearer than last week at Ballarat, with the best pens of heavy domestic lambs also recording a stronger trend. But some of the secondary trade and light lambs were cheaper in places.

Light weight lambs generally sold from $60-$90, while local restockers and a feedlot buyer paid up to $110 for bigger-framed store lambs. The general run of domestic slaughter lambs sold from $96-$120, with bidding tending to fluctuate based on quality and finish. The top pens of heavy domestic lambs, suiting supermarket orders, sold from $125-$140 to average dearer and it was the better presented pens which recorded the most price improvement. The good quality trade lambs averaged an estimated 530-540c/kg cwt, with select pens higher.

Heavy export lambs sold from $160 to a market top of $180, with most sales ranging from an estimated 510-530c/kg cwt. However, apart from the feature lines, which were very even and well finished, bidding was more selective.

The NLRS said the generally good quality yarding of crossbred and Merino lambs sold to a full complement of local and interstate trade and processor buyers. Feeders operated sparingly on heavier, 3 score crossbred lambs and restockers bid sporadically on light weight Merino lambs with some fleece.

The NLRS said more buyers attended the sale, but not all were fully active on the mixed quality yarding. Prices tended to improve throughout the market.

Most lambs sell firm at Muchea

Light store lambs to restockers included large numbers of Merino lambs that sold firm at $44-$61. Light lambs to air freight processors and feeders were also firm, with most prices from $64-$85. Trade lambs were in good supply, with the 18-22kg cwt lines making from $95-$114. Heavy lambs sold from $115-$137, with most sales firm.

The mutton market was firm across all types. Light weight drafts made $49-$72 and the 2 score mutton to processors sold from $55-$81. Better conditioned drafts, including the heavy weight supplies, sold from $75-$100.