SMALL stock production – lambs, mutton and goats – has doubled at Thomas Food International’s Lobethal plant after staff redeployments and the granting of conditional B-Double access to the South Australian plant. 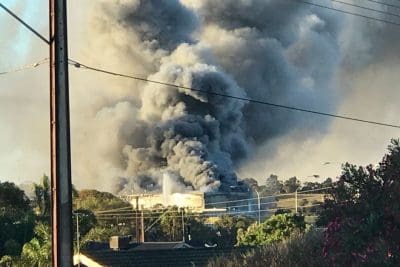 In an effort to address the regional impact from the January 3 fire at TFI’s Murray Bridge plant and support recovery plans, the TFI Fire Co-ordination Taskforce has co-ordinated state and local government requirements to help TFI get staff back to work and increase production at its Lobethal facility.

The cross-government taskforce worked quickly to address road and transport, environmental and water and town planning requirements needed to support the partial move of TFI processing to Lobethal.

Conditional B-double access has now been granted to the TFI abattoir, located on Frick St at Lobethal. This will enable production to increase at the facility and reduce the number of truck movements associated with this increase.

“Obviously the aim is going to long-term B-double access into that plant.

“It was really a great effort by all the regulatory authorities to get that B-double access in place in such a very short time so we could maintain the level of kill.”

Mr Thomas said with the doubling of small stock production at Lobethal, the company had picked about 50 percent of the lost small stock capacity at Murray Bridge.

“That will really cover a lot of the stock that we draw out of South Australia.”

The company still had the ability to send some stock north to its Tamworth plant in New South Wales if required, he said.

“We’re increasing our kill by about 20-25pc at Tamworth, which requires another 150 people.

“So we will end up picking up about 75-80pc of the small stock (mutton and lamb) we were processing prior to the fire.” 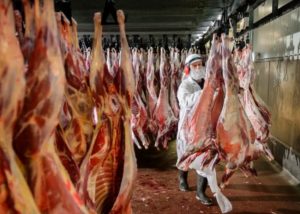 TFI’s small stock processing at Lobethal has been doubled.

Mr Thomas said 340 former Murray Bridge employees had now started work at the Lobethal meat processing facility and the company was in the process of making another 70 positions available there in the short term.

“We are also in the process of creating approximately 150 new positions at our Tamworth facility for our employees, effective immediately. This is in addition to the current recruiting campaign we have in place in Tamworth for local residents seeking to join our company.

“More than 90 staff remain employed at Murray Bridge working in specialist areas within our operations unaffected by the fire.”

Mr Thomas said the company and its people have been truly tested these past weeks, but were a resilient and determined team.

“There are no easy solutions in a difficult situation such as this.

“To find new positions for the majority of our 900-strong permanent workforce so soon after the fire is testament to the outstanding efforts of everyone involved,” he said.

“This shows what can be achieved when industry, government and communities work together for a common goal.”

Mr Thomas said TFI had met with its insurers and the company was in the initial stages of planning for a rebuild of our Murray Bridge operations.

“We are committed to Murray Bridge and while it is too early to provide further detail on what may be required, the rebuild process could take between 12-24 months.

“Demolition work on site has already begun and we will keep the community informed as we develop our exciting plans for bigger and better Murray Bridge operations.”

The Department of Planning, Transport and Infrastructure, with Adelaide Hills Council, undertook an independent assessment and found conditional access could be granted to the Lobethal plant with the installation of additional signage and conditions regarding speed on the defined route to and from the abattoir.

The Environment Protection Authority and SA Water worked together to identify how the local water and sewer network can best support a planned increase in processing, while limiting impacts on the environment and community.

To facilitate the operational change, SA Water has substantially completed sewer upgrades near the Lobethal facility and installed a new water connection and other supporting equipment on the company’s site.

SA Minister for Employment, Kyam Maher, said since the devastating fire at TFI’s Murray Bridge plant on January 3, the fire co-ordination taskforce has met regularly and worked closely with TFI to ensure a united, rapid and effective State Government response.

“Jobs are the South Australian Government’s number one priority.

“We’ve worked hard to address Thomas Foods’ immediate needs as it plans its recovery, while also reducing the significant effects that a loss – even temporary – of such an important regional business can have on regional communities like Murray Bridge,” he said.

“The support from local councils and communities in both Murray Bridge and Lobethal has been outstanding and it’s wonderful to see everyone rally and work together in such a way to support Thomas Foods, its workers and regional businesses.

“The relevant agencies will continue to consult with the local councils and community, and work closely with Thomas Foods, so we can ensure minimal impact on the Lobethal community while the company rebuilds at Murray Bridge,” he said.

“As one of the state’s biggest employers, and a company that continues to have a vitally important role in a livestock industry that’s worth $4.8 billion to this state, it’s critical that as a State we support them in their efforts to rebuild.”

The TFI Murray Bridge fire is the second large meat processing industry fire in Australia in a little over 12 months, after the Swickers Pork processing facility near Kingaroy in Queensland was destroyed by fire before Christmas, 2016. Swickers was the largest pork processing plant in the southern hemisphere, employing around 600 staff. That fire destroyed the plant’s chillers, boning room and export distribution centre.

SunPork has continued to operate on site since the fire, with the Swickers kill-floor left intact, allowing about 140 staff to be relocated to work at a temporary boning room at Ipswich, in the state’s southeast.

In September, the Queensland Government provided support for a $100 million expansion and jobs drive as part of the Swickers recovery. The Government’s Jobs and Regional Growth Fund provides one-off financial assistance ranging from $100,000 to more than $10 million in either direct grants or relief of state charges such as payroll tax and stamp duty).