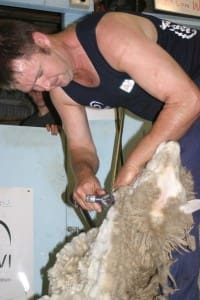 A FEW Teddy bears and about 700 sheep will be shorn at the Australian Sheep and Wool Show in Bendigo later this month.

The three-day North Central Victorian Sports Shear Association fixture from July 17-19 is one of the biggest shearing and wool handling events in Australia.

It is serious for some — Victorian shearers and woolhandlers will vie for national team selection on the Sunday – and less serious for others.

NCVSSA president Garry Griffin said after the state representative events on Sunday the Teddy bear event will be held for the kids, who will get to wrestle a few big Teds armed with shearing brushes instead of electric handpieces.

“The mums and the kids love it.

But seriously, Mr Griffin said about 100 machine shearers, 40 wool handlers and 20 blade shearers will compete at Bendigo, including Australian champions.

A Friday morning training session for shearers and wool handlers will be followed by blade shearing competition in the afternoon, including an inaugural learners event.

On Saturday competitors from all over Victoria, Australia and possibly New Zealand will contest open, senior, intermediate and learner shearing competitions and in the open, senior and novice wool handling.

On Sunday, shearers and wool handlers from east Gippsland, Western Victoria and the Riverina will compete to accrue points to represent Victoria at the national titles this year, and from there possibly a berth in the Australian team for the Goldens Shears event in Masterton. Shearers and wool handlers have accrued points at Victorian and Deniliquin events since July last year to qualify for one of three positions in each grade in the Victorian team.