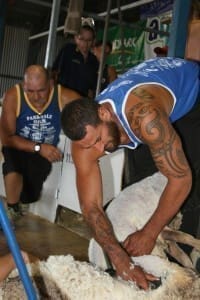 The 36-year-old gun based at Bathurst in NSW shore 530 fine-wooled ewes at the Parkdale Merino stud’s property north of Dubbo last Friday, beating the previous record of 513 set 10 years ago in West Australia by New Zealand-born Dwayne Black.

Shearing Industry Promotions Inc treasurer Mike Pora said starting from 7am Australian east coast time, Te Huia shore 113 in the opening run of two hours and in successive one hour 45-minute runs he took the wool off 103, 105, 104 and 105 sheep, finishing at 7pm.
Mr Laing said Dwayne Black shore 112, 103, 98, 99 and 101 sheep in his April 2005 record, beating the previous record of 507 set by New Zealand finewool maestro Dion Morrell near Tarras in Central Otago in 1997.

Mr Te Huia said he shore to the condition of the sheep in setting the new record.

“You try your hardest, but it is up to the sheep to allow you to do the numbers.”

He prepared for the record shear with “years of hard slog mainly.”

In April this year he will attempt to break the eight-hour Merino ewe record of 466 sheep.

“I’ll just do it to make it harder for anyone else that wants to go for it,” he joked.

“It was great to see so many young shearers there to watch and help and get ambitions of their own to one day create their own history.

“He was only one sheep in front at morning tea, but we were confident as he is one of the fittest athletes in the country if not the world,” he said.

“To keep up that effort for nine hours solid is a tremendous effort.

“It is great to have positive publicity for our industry which is what our committee is striving to achieve.”

Event will raise $5000-plus for Dubbo RFDS

The event was expected to raise more than $5000 for the Royal Flying Doctor Service at Dubbo, Mr Pora said. The 514th fleece was auctioned at lunch on Saturday and after a bidding war with fellow sponsor Techwool Trading, Don Chad from Chad Wool bought it for $1500.

Mr Laing said Te Huia first appeared in the World Sheep Shearing Records Society’s record books as a 20-year-old in 1999 when he and brother Hayden shore a two stand record for eight hours, and has made two unsuccessful attempts on the pinnacle solo nine hour strongwool ewe record of 721 – the latest of which was abandoned near Bennydale on January 22 when the target was out of reach by lunchtime. His sister, Kerri-Jo Te Huia, holds the Worlds women’s solo lamb shearing record for eight hours at 507, also shorn in January 2012.
On Saturday at Parkdale, Beau Guelfi from WA and NSW shearer Bob White made an unsuccessful attempt at the solo and two-stand eight-hour Merino records set by expatriate Kiwi brothers Cartwright and Michael-James Terry in West Australia in 2003.