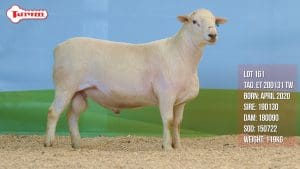 RENOWNED New South Wales Australian White stud Tattykeel has broken records at its annual sale this week, with one of its rams making $165,000.

The stud and flock ram sales were held at the company’s Branxton Park property, in conjunction with livestreaming and bidding on AuctionsPlus.

It continued a strong year for Tattykeel and the Australian White breed, with average prices increasing 81 percent on last year, at $14,141, and the sale exceeding $5.6 million.

The sale was the largest offering of Australian Whites in the breed’s history, with 400 lots penned.