These scanned in-lamb Australian White ewe lambs sold for a record $988 on AuctionsPlus this week. 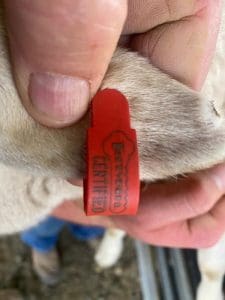 A UNIQUE red Tattykeel Certified ear tag has potentially added more than $300 to the price of the most expensive commercial ewes sold in Australia.

The sales, through agent Craig Pellow, set what is believed to be an Australian and AuctionsPlus commercial ewe record, smashing the previous online sale record of $328 set for AW ewe lambs. Australian White sheep were developed by the Gilmore family’s Tattykeel stud.

The Adler ewes were the first Australian Whites to be sold with the red ear tag certifying their Tattykeel blood background and their price exceeded the reserve by almost $390.

Mr Adler said he didn’t expect to receive $988 for the ewe lambs, which were scanned in-lamb for a July lamb to Tattykeel AW rams. He has never sold AW ewes before, but they were surplus. The Adlers run 650 AW ewes on 2000 acres, and lease another 2000 acres, at West Wyalong.

“We put a $600 reserve on them, because of the quality of them, but I didn’t expect the price they made.”

He believed the Tattykeel certified red tags in the ewes helped the sale.

“I’ve been with him (Tattykeel stud principal Graham Gilmore) for those 10 years – I haven’t gone anywhere else.

“He knows how to put genetics together to get the end result – good quality sheep.”

The Adler have been breeding Australian White sheep since 2011 after breeding WiltiPoll sheep for six years. Before the WiltiPolls, the Adlers had run a Merino flock, deciding to move into 2006 to shedding sheep due to low wool prices.

He said he had no regrets with moving into shedding sheep and then into Australian Whites.

“When I was breeding Merinos we used to work on 85-90pc of lambs (marked), and only two years out of all the years I had them did I get over 100pc,” he said.

The “1947 vintage” breeder said he now works on marking 140pc-plus lambs from the Australian Whites from one joining a year.

“When you work out the price of those extra lambs, it more than pays for any wool cheque.”

Mr Adler said he could see from his first inspection of the Australian Whites at the Gilmore family’s Tattykeel stud that the sheep would improve his flock’s growth rate and carcase quality.

“I’ve shaved three to four months off the time it takes to get them (lambs) away (at 22-24kg carcase weight.”

Agent Craig Pellow said the $988 result was “unbelievable”, but he believed the Tattykeel Certified red tag added “$300 a head, maybe more” the price. The sheep sold to a Condoblin sheep producer. He said the red tag system was introduced to identify sheep that were pure Tattykeel blood; out of Tattykeel blood ewes and by Tattykeel-bred rams.

He said the huge interest in Australian Whites is being driven by a lack of shearers, the breed’s growth rate. The sheep don’t need to be shorn, mulesed, or treated for flystrike or lice. His good clients are lambing three times in two years, generating 200pc of lambs annually and grossing more than $830 per ewe per year.  He said demand for AW ewes exceeded current demand “by a mile” and with composite ewe wool clips not covering costs “these sheep are the future.”

“This is the future mate,” he said.

AuctionsPlus said on the two Adler lots, there was bidding from all over the eastern states, one bidder from SA, two from Victoria and six bidders from NSW.

AuctionsPlus offered 702 pure Australian White ewes in 18 lots on Tuesday, with all but one lot selling. Prices continue to remain robust with scanned in-lamb AW ewes averaging $585 for the 436 head sold. Ewe lambs averaged $450 for the 132 head sold, and station mated ewes averaged $317 for 91 head sold.