LAMB and beef producers from ‘mainland’ Tasmania and King Island figured among the winners in JBS Australia’s inaugural Tasmanian Supplier of the Year awards and forum held in Launceston on Thursday night. 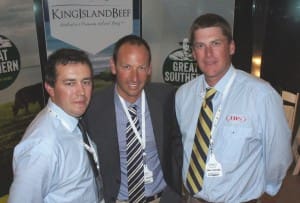 In announcing the award winners, JBS Australia’s Southern Division chief operating officer Sam McConnell said the success of the company’s farm-assured beef programs would not be possible without the ongoing commitment from the producers of Australia to continue to deliver JBS the highest quality livestock that met the tight specifications customers around the world demanded.

He thanked the 2000-plus producers in southern Australia now aligned with the program for their loyalty and dedication to supplying the quality livestock to meet the growing demand for JBS farm-assured beef and lamb both domestically and in export markets.

“While there have been three producers singled-out for awards today, they are representative of almost 2000 livestock producers that are currently active participants in JBS Southern’s Farm Assurance program, and each one of them plays a critical role in our ability to provide our customers with the product and service they need 52 weeks of the year.”

Mr McConnell announced the winners of the Producers of the Year at a function held in Launceston attended by 140 beef and lamb producers from across Tasmania, King Island and Flinders Island, plus a selection of government and industry representatives.

JBS Farm Assurance was developed in 2010 after the business identified the growing global demand for an on-farm quality assurance standard that guaranteed specific safety, animal welfare, traceability and management practices. “The high quality of the product we have, along with the integrity of the JBS Farm Assurance program, has delivered a restaurant quality ‘natural’ product with integrity that is second to none,” he said.

“It is the very rare combination of natural attributes, ISO 17065 integrity and superior eating quality that has captured major customer’s attention, producing rapid market growth for our program business in Australia and overseas over the past year,” Mr Ryan said.

“Since its inception, JBS Southern’s Farm Assurance has developed a strong reputation for the vigorous third-party auditing process that verifies the standards the program demands, the cost of which is borne by JBS Australia, not the producer.”

In late 2013, JBS Australia launched its first brands to be underpinned by Farm Assurance, Great Southern Lamb and Beef , and since has seen a rapid uptake of participation by farmers due to the price premiums the program offers and the sustainable management practices it encourages. 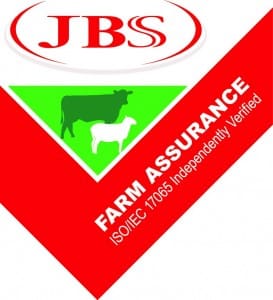 The King Island Beef and Redgum lamb brands have since been added to the farm-assured process.

“It is our vision that by participating in this program and developing strong working relationships with JBS Australia, producers will remain financially and environmentally viable for the long-term, so the ‘family farm’ will be passed down through the family,” Sam McConnell said.

JBS Southern livestock manager Steve Chapman said the numbers of livestock now passing through the program, and the number of producers involved, reflected the premiums being passed down through to the producer over and above normal grassfed programs.

“In the last two years, JBS Australia has made a conscientious effort to place an increased focus on brand marketing to drive greater value and margin back through the supply chain to the farm gate,” he said. “It has become part of our day-to-day operations and is part of our DNA.”

“For the long term benefit of all involved, we need to continue to have the producer and the end-user working hand-in-hand with JBS as a team and everyone striving to be the best at what they do.”

“We can’t deliver sustainable brands to the global market without a reliable and consistent supply of cattle and lambs that live up to the quality standards our brands promise.”