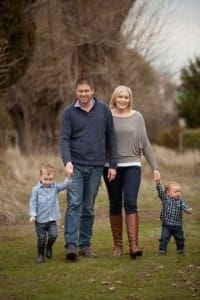 TASMANIAN sheepmeat producers John and Annie Ramsay have transformed their business in 12 months with productivity improvements that exceeded their expectations, taking them to first place in the inaugural Meat & Livestock Australia (MLA) Challenge.

The competition winners were announced at a ceremony in Sydney last night.

“We are incredibly surprised to have won, given the calibre of the other five families in the MLA Challenge,” John Ramsay said.

“All the other Challenge contestants are really impressive. They have all made great changes throughout the year and have amazing stories to tell.

“It’s been a year of very hard work, and Annie and I are thrilled.”

The Ramsays run a 14,000 head flock of Merino and composite sheep on their properties Ratho and Tarella, totalling 2800 hectares, near Bothwell and Dysart, Tasmania.

They are part of a group of six beef and sheepmeat enterprises from across Australia which have just completed a year engaged in the MLA Challenge, striving to improve efficiency and productivity within their farming operations.

“After a year in the MLA Challenge, the Ramsays’ pregnancy scanning results have risen from 135pc to 175pc, they are turning off 30pc more lambs, at an earlier time, and their labour efficiency has improved from 7000 dry sheep equivalents per full time labour equivalent, to 8500 dse/fte,” Mr Vaughan said.

The final scores of the six competitors were extremely close, and all six families have proven what Australian producers can achieve by using the tools and resources at their disposal.

“Australian meat producers should take heed that no matter where your business is located, MLA has tools that are relevant and beneficial to your operation and can improve your productivity and profitability. The Challengers have shown how it can be done,” Mr Vaughan said.

Mr Ramsay said the MLA Challenge had inspired him and his wife to set a new business strategy with high goals.

“Instead, we went in with crossbred ewes (including 2000 extra head), in with spring lambing and in with a whole new simplified system producing more meat per hectare.

“The results have been fantastic. After changing to crossbred ewes we have produced 30pc more lambs – potentially earning us an additional $75,000.”

“By the end of June we had turned off 6500 lambs, compared to 3000 lambs the year before. The increase comes from producing more second cross lambs and from focusing on finishing them more quickly and effectively. At $100 per lamb, that’s a major improvement, plus we can run more ewes through winter without the lambs hanging around.”

Mr Ramsay said he has also made changes to how he recruits and retains his staff, and the family has changed banks, prompted by advice from one of the judges to assess all parts of the business and look for the best deals possible.

“MLA’s tools have been excellent, particularly the Feed Demand Calculator, which we relied on heavily. I also had a light-bulb moment hearing judge Sam Newsome from Agripath explain that the top 20pc of farmers manage their team well – I knew I had to focus more on the people side of the business.

“The main thing we’ve learnt is to get independent, specialist advice and to focus on the things in the business that really make a difference,” he said.

The Ramsays were awarded a bursary to support their ongoing professional development and additional agribusiness services.

They were up against five other MLA Challengers, published here in order of their final ranking in the competition:

Each challenger spent the past twelve months focusing on their business, using the best tools, resources and advice available, and the positive results achieved across all areas of their triple bottom lines speak for themselves.

An independent review of the program is now being carried out to determine its future.

About the MLA Challenge

The inaugural MLA Challenge has been an initiative involving six Australian beef and lamb producers competing to improve their business productivity and profitability over a year, from July 2013 to June 2014. The families have been helped to improve the productivity and profitability of their businesses by the support of farm business mentors and a wealth of industry information, including MLA research and resources.

The Challenge is based on:

For more information about the MLA Challenge, links to tools used by the participating producers, as well as updates, videos and background information on each Challenger, visit www.mla.com.au/challenge