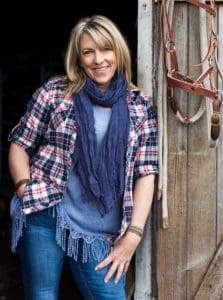 She describes herself as an author and a regenerative agriculturalist, but has also worked as a jillaroo, rural journalist, ABC radio broadcaster, professional wool classer, family farm manager, drover and a truffle dog handler.

She has written six bestselling novels and has written a screen play, collaborated on songs with the Wolfe Brothers and written three non-fiction books. One of these, Dog Speak, a self- published book created as part of her Tasmanian Rural Women of the Year bursary.

Rachael has a great passion for working dogs and often mentions the Kelpies of Hamilton dog trainer and breeder, Ian O’Connell, in her novels. Ian is a co-organiser of the farm dog championship trial at Sheepvention.

Rachael will open the three-day event at noon on Monday August 7 and Sheepvention visitors can also see her at the Home Paddock stage on Tuesday August 8.

Sheepvention kicks off with youth fashion ideas and dogs

The main Sheepvention 2017 program on August 7 and 8 will include The Hamilton and Western District Sheep Show, the Coprice Victorian Farm Dogs Competition, the ram sale, inventions competition, the Elders Clip of the Year award, wool handling and young auctioneers’ event.

Suffolk sheep are the feature of the 2017 sheep show and Sheepvention president Gordon Last said about 1000 show sheep are expected this year.

“The Merinos will be expanding their classes, as numbers are increasing due to positivity in the industry.

“We are very excited to welcome Suffolks as the feature breed this year especially as they are such a progressive breed,” he said.

The cattle yards have been moved to a marquee adjoining the wool shed ram selling centre to display steers from Emmanuel College and an exhibition of cattle from Banquet Angus and Eloora Shorthorns.

“Moving the cattle yards mean we can now use the ram sale selling rostrum for our Young Auctioneers Competition on Monday afternoon,” Mr Last said.

“This gives the young auctioneers a huge atmosphere to sell in.”

Mr Last said there is increased prizemoney for the young auctioneers’ competition and it will be video-streamed live by Elite Livestock.

Inventors will compete for more than $6000 in cash and prizes in the Sheepvention Inventions Competition, now in this 39th year.

Enquiries for this year’s Hamilton Sheepvention can be made via Hamilton Showgrounds, phone: 03 5572 2563 or email [email protected]

All entry and field day information can be downloaded at www.hamiltonshowgrounds.com.au