MORE than three quarters of Australia’s wool growers are completing the National Wool Declaration on their clip specis, with Tasmania leading the way with an uptake of more than 90 percent.

However, only about half of Western Australian clips are sold with the important mulesing status and pain relief declaration certification. 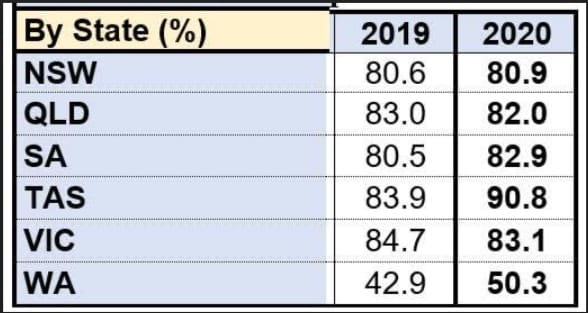 National Wool Declarations by state from 2019 to 20. Source – AWEX.

Australian Wool Exchange chief executive officer Mark Grave said over the last seven months there has been greater awareness of exporter and processor interest in the NWD and the national declaration rate has lifted from 73.7pc in 2019/20 to 76pc in 2020/21.

“This has been a steady and consistent rise over the last decade.

“We have also seen a marked increase in the performance of WA where the declaration rate has increased to 50.3pc, the first time we have recorded more than 50pc in WA.”

Mr Grave said the rate of increase in declarations over the last 12-18 months nationally has been very positive; however, there is scope to improve and exporters and processors are demanding this and it is being reflected in the market signals.

“Year-to-date, the non-mulesed/ceased mulesing (NM/CM) declarations account for 19.1pc, up from 17.7pc in the previous season.

“This indicates that farmers are changing their on farm practices,” Mr Grave said. The release of the latest NWD statistics have been released with data on price discounts and premiums associated with the different NWD categories.

Vice-president of the National Council of Wool; Selling Brokers of Australia Stephen Keys said in addition to the solid premiums for non-mulesed wool, analysis from AWEX showed that there are discounts inflicted on wool offered at auction without a National Wool Declaration.

“For example, there was an average discount of 9 cents per kilogram on 19 micron wool that did not have a National Wool Declaration.”

“It is very pleasing to see that in the first seven months of the 2020/21 season that just over two-thirds of first-hand grower bales offered at auction had a National Wool Declaration. But more needs to be done to lift this uptake rate as close as we can to 100pc,” he said.

“NCWSBA believes that all Australian wool producers should be made aware of the discounts that are being imposed at auction for wool that does not have a National Wool Declaration.

“The market is clearly seeking transparency regardless of the mulesing status of the wool that growers offer,” Mr Keys said.

“NWSBA and its member companies encourage all growers to complete, sign and submit a valid National Wool Declaration with their wool.”

AWEX data for the first six months of the 2020/21 season to December 2020, showed that premiums for non-mulesed wool were a little lower than in 2019/20, but come even though prices for Merino wool fell to decade lows as the full brunt of the COVID pandemic was felt throughout the wool textile industry, the NCWSBA said. The data also shows that there were statistically significant discounts inflicted on wool offered at auction that did not have a National Wool Declaration.

“These premiums are a little lower than those recorded for the full 2019/20 season but that is not surprising given that demand for wool was very weak throughout the first half of this season and wool prices fell to the lowest seen in a decade or more,” Mr Keys said.

“The fact that the average premiums were sustained at the level they were this season is a testament to the continued demand for non-mulesed Australian wool.

“Remember that these are average premiums”, Mr Keys said.

“These do not show some of the much higher premiums that NCWSBA is aware have been achieved for good quality, fine non-mulesed Merino wool, or for non-mulesed fine Merino wool that is sold directly by growers under contract.

“It is also important that growers know of the continued substantial premiums for non-mulesed wool, which reflects the clear demand signals from the global wool textile industry,” he said.

“This should help Australian wool producers in their management decisions about mulesing.” 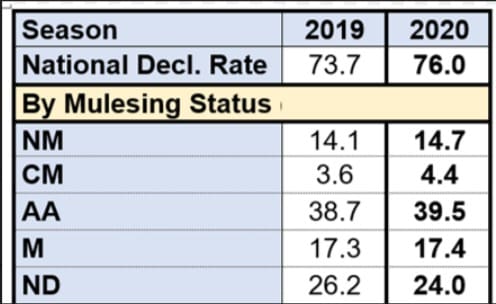 He would like to see WA brokers urge their clients to make a National Wool Declaration on their clip speci.

“The brokers need to get the growers to fill it out.”

He suspects that pain relief for mulesing is underreported in the state and he would like to see growers fill out their NWD to show the actual uptake.

The AWEX analysis also showed that average premiums of up to 25 cents/kg for wool from sheep mulesed with analgesic or anaesthetic have been paid in the first half of this season for superfine wool finer than 18 microns.

However, Australian Council of Wool Exporters and Processors executive director Peter Morgan said there is evidence that not all growers make use of the opportunity to declare their wool, even when it qualifies for a mulesing status declaration. He said exporters also encouraged all growers who have made the necessary changes to their management to ensure they make maximum use of the NWD to record the mulesing status (NM, in particular, and CM or AA) to make it easy for exporters to bid on their wool.

The main form of pain relief used for mulesing has been Tri-Solfen, formerly marketed by Bayer Animal Health, until Elanco acquired the company last year. Former Bayer Australia-New Zealand animal health division chief executive officer Andrew Mason said there was a surge in Tri-Solfen usage in 2019 and into 2020 across Australia, which despite increased uptake for cattle dehorning, indicated that pain relief use for mulesing increased, possibly above the 80pc level. And this was before pain relief for mulesing was mandated in Victoria from July 2020, he said.

“What we observed was that as sheep and wool prices increased there was a direct correlation with investment in their animals.

“We saw that wool was high value at the time and there was a real change where pain relief was used much broadly across the sheep industry,” he said.

“We originally thought it (the sales increase) was just cattle business and it wasn’t, because we saw the surge in the southern markets jumping significantly as well.

“We believed that the adoption of pain relief in 2019 and 2020 was increasing to what we thought was above the 80pc level (among producers mulesing sheep),” Mr Mason said.