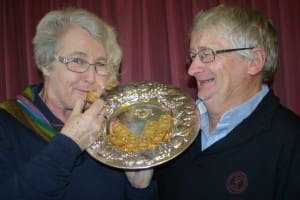 Susan and David Rowbottom sample some of their gold booty from the Zegna awards.

South-west Victorian ultrafine woolgrowers David and Susan Rowbottom hope it won’t be the last time they get to fly home with a bag full of gold.

The prestigious Zegna Velleus Aureum Trophy and gold booty was theirs for the first time at only their third attempt in the awards’ housed wool section.

The Rowbottoms’ 1.37kg (skirted) 10.8 micron ultrafine Merino fleece scored 88.91 points to win first prize and another 10.4 micron fleece gave them a silver platter for second place. It is the first time any grower has won first and second places in awards. Their Rowensville flock entries placed second in 2012 and in 2013.

“We were over the moon, it was nearly out of this world,” David said after the win.

But after the euphoria of the presentation by Count Paolo Zegna at the Grand Hyatt Hotel wore off, the Rowbottoms had to get their prizes home. David admitted he didn’t feel the need for any security other than his wife Susan for the flight home. So they bought another suitcase for the replica Velleus Aureum golden sculpture and David simply kept a tight grip on the gold booty in a plastic bag. They decided against putting the gold in checked luggage after their plane to Melbourne had cargo door problems before take-off from Portland.

“I just kept it low key – Susan was paranoid about it.

“You had to keep it low key and walk on like it was nothing,” he said.

“I put it between my feet.”

The gold is now in a more secure place off-farm and the Rowbottoms are back home producing wool and prime lambs on their 800mm rainfall country at St Helens. They started their ultrafine Rowensville Merino Stud in 1995 and the 2013 flock micron average was 14.2 micron. The sheep have not been mulesed for the past 34 years.

But despite winning the Zegna award and Rowensville wethers also winning or placing under other owners in past years, the couple said their ultrafine sheep operation is still subsidised by prime lamb returns from their crossbred flock.

David said returns for housed ultrafine Merino wool this year were viable for the first time in three years and just above those for paddock-grown wool. Overall paddock wool returns were above last year, but only because they sold wool outside the traditional auction system, on WoolTrade.

“The week we sold that 13-14 micron wool by WoolTrade we averaged 1480c/kg for our fleece wool and broken lines, when the top price in the auction system was 1190c/kg.”

Poor ultrafine wool returns have cut the number of housed wool operations from 30 to four in recent years, yet the Rowbottoms still plan to lift housed wether numbers from 380 to more than 500 next year, and to 600 in three years.

“If it keeps paying,” Susan said.

And with the state of the ultra and superfine wool market, sons coming onto the farm and no superannuation apart from farm equity, the Rowbottoms won’t be cashing in their gold bars for a holiday or a new car.

“I don’t know about the wisdom of turning gold into tin and plastic.

“In five years’ time what have you got left? A worn-out car,” David said.