Lamb weaning rates have varied little in the past 30 years, stagnating at around 80 percent of ewes joined. But improved monitoring of ewes and feed resources, as well as significant industry investment, means there are more opportunities for producers to lift weaning numbers.

Now with a better understanding of the factors affecting lamb survival, some solutions have been developed to assist producers this lambing season, a Meat & Livestock Australia report says. 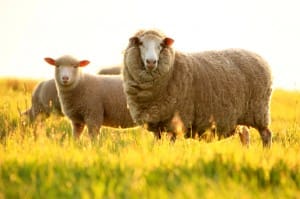 In Victoria, LTEM participants had lifted the number of lambs weaned per hectare by more than 20pc, Dr Trompf said.

Dr Trompf said the sheep industry needed to overcome negative preconceptions about weaning rates, including the ‘myth’ that achieving higher reproduction rates was not economically viable.

“In LTEM, we have found it possible to simultaneously increase stocking rate, reproduction rates and ewe survival profitably,” he said.

“This is a result of better feed allocation to different classes of ewes, based on condition score and pregnancy status, and more targeted and proactive use of feed resources at critical stages of the reproduction cycle – such as the recovery of light ewes post-weaning and twin-bearing ewes in late pregnancy and throughout lambing.”

Dr Trompf said the most effective means of improving lamb survival was to undertake pregnancy scanning and condition scoring of ewes at 90 days.

“By pregnancy scanning, producers can determine single or multiple pregnancies and more effectively manage ewe nutrition in the last six weeks of pregnancy, as this has the most significant effect on lamb survival.”

“Some producers also say that lamb weaning rates are driven by factors like seasonal conditions and predators – that’s code for ‘it’s not in our control’. But ewe nutrition in late pregnancy and at lambing is manageable, and it has an enormous impact on ewe and lamb survival,” he said.

There are three aspects to this:

If the ewes lamb over a longer period it’s difficult to tailor nutrition to the entire mob. There are also flow-on effects, particularly when producers delay weaning to grow out the smaller lambs, as it compromises the ewes’ opportunity to recover for their next reproduction cycle. This typically leads to a lower peak condition score, which adversely affects next year’s conception rates and – importantly – means there is more scope for the ewe to lose condition in the ensuing reproduction cycle.

Scan to determine single or multiple pregnancies then separate ewes into their categories – dry, single and twin-bearing – and allocate nutrition accordingly. Ewe nutrition in the last 60 days of pregnancy relates directly to lamb birth weight, with low birth weight and overly high birth weights, accounting for about 60pc of lamb losses.

These strategies can be used to address two significant causes of lamb loss, particularly in twins, being exposure and mismothering. Allocate twin-bearing ewes to the most sheltered paddocks, because the lower the lamb’s birth weight, the greater the risk of death due to exposure. Lamb twin-bearing ewes in smaller mob sizes to ensure privacy at lambing. The number of lambs born in a paddock each day governs the opportunity a ewe has to bond with her lamb at the birth site, which enhances the ewe’s maternal behaviour.

Time of lambing is a critical decision, integrating numerous factors such as matching feed supply to ewe demands, weather conditions, target markets and labour resources, particularly in mixed farming businesses. Rarely does a given time of lambing tick all boxes perfectly and typically there will be trade-offs. Advantages of lambing out-of-season, when there may be little green feed available (with the aim of lambing before sowing crops or to hit mild weather conditions or to target early sucker lamb premiums), are often outweighed by the increased cost of production due to supplementary feeding and reductions in income from ewe and lamb losses due to nutritional deficits.