THROUGH this year’s challenging times, the red meat industry has been able to maintain or grow positive perceptions about its product among consumers, and is starting to hear more positive messages about the industry, an industry webinar was told this afternoon.

The webinar on building resilience through community trust in the red meat industry was part of a series hosted by MLA this month, in the lead up to the industry service delivery company’s online annual general meeting tomorrow.

MLA consumer insights manager Emma Gillingham said MLA had built up a large database on consumer sentiment through annual surveys conducted over the past decade, designed to “understand what Australians really think about the red meat industry.”

“It’s important to put that into context, considering the year we’ve had, with COVID and weather challenges for consumers and producers alike, both at a local and global scale,” she said.

“There’s also been a number of things that are top of mind for consumers – issues that are concerning them today.” 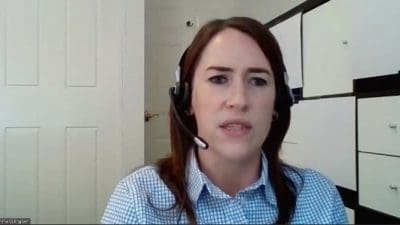 Broadly, these concerns could be placed in one of three buckets – society, the environment and the economy.

“What we’re seeing this year is that concerns about the economy have really overtaken the others – that could be anything from the state of the global or local economy, through to peoples’ personal financial situation,” Ms Gillingham said.

In the context of these challenges faced by consumers, it was important to keep in mind that Australian red meat remained in a very strong position, she said.

Some of the key learnings from MLA’s consumer sentiment research are set out below, designed to understand what the community attitude is towards the red meat industry, and potential concerns that consumers may have.

“Broadly what we see is that Australians have quite a positive perception about the Australian red meat industry,” Ms Gillingham said. “Some 67pc tell us they feel good or very good about the beef industry, and 62pc about the lamb industry.”(see graph) “The majority have a fairly positive perception, and that trend has been fairly stable over the time we have been tracking it,” she said.

When asked about specifics within the industry, broadly consumers said that Australian cattle and sheep farmers made a positive contribution to society; that beef and lamb were environmentally friendly and sustainable; and that the industry was doing all it could to reduce its impact on the environment. “Particularly some of these perceptions towards environmental factors have become more positive among Australians this year, compared with last year,” Ms Gillingham said.

What’s also important to note in the above graph was the grey area in the middle, indicating that around one third of Australians did not know, either way, on some of these issues.

“That starts to suggest that many consumers just aren’t very well informed about our industry practises,” Ms Gillingham said.

MLA’s study also sought to find out whether consumers had heard any messages about the industry – either positive, negative, or nothing at all.

“The research suggests around half of consumers say they have heard something positive about the industry, and this year more consumers are telling us they are hearing more about the high standards the industry upholds, and the positive impact it has on the Australian economy,” she said.

The study also sought to understand whether consumers had heard anything negative about the industry.

Only quite a small proportion (around 40pc) had heard something negative, and most of these things they thought they had heard were related to animal welfare or live export.

Ms Gillingham said the study was also used as a gauge of consumers’ perceived knowledge about the industry.

“What this tells us is that only around one in three Australians feel quite knowledgeable about the red meat industry, although this has been increasing over time. But when it comes to specifics such as potential environmental topics within the industry, this is where consumers are much more likely to feel less informed.”

“In some ways, consumers feel they know more, but at the same time less than ever before.”

“There is a desire among some consumers to understand more about these production practices. This is indicated through 44pc of consumers telling us they are interested in learning more about red meat production, and visiting a cattle or a sheep farm. But in reality, relatively few (around 38pc) say they have actually visited a livestock property in the past.”

The study also asked a series of questions to better understand consumers consumption of red meat, showing that overall consumption is quite stable, with most red meat eaters not reducing consumption in the past year – nor were they planning to do so in the future. There was also a small proportion (10pc, marked in green on the graph) that told the survey they are actually eating red meat more often.

The proportion of consumers eating red meat less often (28pc in the June survey, marked in red), has changed very little over the past ten years.

“What we can see over the decade we have been tracking this is just how stable Australians’ meat consumption has been.

“However it is important to understand more about those who may be reducing their red meat consumption, and some of the drivers behind it. What this tells us that among those 28pc of consumers who say they are eating less red meat, the main reason given was that it was too expensive.

“When we think about some of the context and the challenges that are concerning consumers this year, with the economy and their own financial position top of mind, it’s not surprising that we see purchase cost coming out as a factor here.”

Ms Gillingham said consumers offered a range of other reasons beyond cost for lower consumption, however, including concerns around the health credentials of red meat, and environmental and animal welfare concerns. It was also important to understand the views of those who do not eat red meat, she said.

“In recent years we’ve also been speaking to vegetarians, to better understand how many vegetarians there are, and what drives their behaviour, she said.

“Research tells us around 7pc of Australians claim to be vegetarian, which has remained stable over the number of years it has been tracked. However among the 7pc who claimed to be vegetarian, 39pc said they occasionally ate meat, suggesting a ‘flexitarian’ trend, rather than necessarily cutting out red meat completely.

Sources of information about food

Finally, the survey asked consumers where they turn to for information about their food.

“What this tells us is that there are a whole range of sources that consumers turn to for information about red meat. Internet searches are a top source of information, combined with a whole range of resources such as the advice of health professionals.

“But what we’ve also observed this year is that consumers are increasingly turning to supermarkets, butchers and food manufacturers as sources of information about red meat.”

“This isn’t surprising, when you consider the year we have just experienced – and particularly earlier in the year at the height of the pandemic, and a lot of the initiatives that supermarkets implemented to help support the community, such as donating to foodbanks, and providing dedicated shopping hours to the elderly. All these initiatives have been quite well received by the consumer, so in that context, it’s not surprising that these channels are increasingly being seen as important and trusted sources of information about their food.”