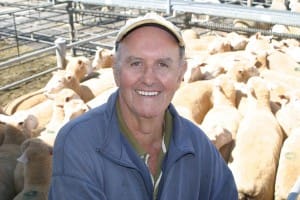 Clarke’s Hill lamb producer Con Powell was happy with Wagstaff paying $148 for his 50 24kg cwt lambs at Ballarat on Tuesday.

The contract is in the market as trade lamb prices averaged firm to slightly cheaper on quality across saleyards this week, despite prices lifting at some centres for the best quality lambs.

Stock agents regard the Coles contract as an attempt to attract supply from the declining number of lambs in feedlots in the 18-25kg preferred weight range. However, agents and lot feeders reported this week that many of the finished lambs in feedlots or on crops were above or at the upper end of the contract’s weight range and prices of 540-580c/kg cwt offered little margin above feed costs for store lambs purchased at $90-$100.

The Coles forward contract stipulates the usual “upside” clause that if the supermarket’s weekly spot price is higher than 580c/kg cwt at the time of delivery, it will also pay half the difference between 580c/kg and the spot price.

The contract is for minimum lots of 150 pocket-crutched lambs sired by terminal rams, with a maximum wool length of five centimetres or shorn no more than 15 weeks before delivery. Seed contamination discounts from 20-100c/kg apply if more than one third of the consignment is affected.

Agents quoted exporter spot prices at 540c/kg-560c/kg cwt this week for 18-35kg cwt lambs, down about 20-40c/kg on prices two weeks ago, though there are indications some exporters are rallying to compete with the Coles forward price. The agents this week said exporters were claiming resistance from importers at current prices.

One agent said exporters told him they were unable to sell lamb at the current prices.

“They are telling me there is boxed lamb all over the place, as much as they have ever had on hand.”

The National Livestock Reporting Service quoted most eastern states and national lamb indicators as lower after the first two days of saleyard sales this week, especially light and restocker lambs.

The mutton indicators improved early this week, with the ES indice up 3 cents to 373c/kg, and the national indicator up 2 cents to 372c/kg.

The NLRS said lamb quality was mixed, but there were good runs of heavy trade and heavy weight lambs. Extra heavy weights were in short supply. Merino lambs were still in reasonable numbers. All the usual buyers operated in a market that held firm on light processing and trade lambs, but easier on heavy weights.

Prices change on quality at Tamworth

The NLRS said the quality of the lambs was fair to good with more young lambs. The usual buyers attended and there was moderate restocker activity. Quality was a price variable in the young lambs suitable for restocking, with one particular order showing confidence and operating over a range of weight categories in the young lambs. There was not a lot of change in the market for the well finished trade or the export weight lambs. Some were slightly cheaper and quality also played a part in the price change.

The increased number of grown sheep consisted of some good lines of medium and light weight Merino ewes and wethers. For the most part, these sheep carried a third to full skin length. Again, market trends saw little but quality-related price change.

The NLRS said the quality of the trade and heavy lambs was good, with more heavy lambs yarded. The usual buyers operated in a firm to dearer market.

The better-presented trade weight and heavy lambs sold $2-$4 up on last week’s levels. There was strong restocker, feeder and processor competition for the large numbers of light weight shorn lambs yarded, and they sold mostly from $80-$109.20, while the lighter lots sold from $59-$73.

The sheep offering included several good runs of Merino wethers and many heavy crossbred sheep. Sheep sold to strong competition, with most selling from $4-$8 up on last week. Some of the Merino wethers eased slightly on the high values of last week, but still returned close to 400c/kg cwt.

The NLRS said quality was good over the trade weight and heavy lambs, with the usual buyers operating in a slightly cheaper market. On quality, lambs were generally from $2-$5 easier on last week with the heavier lambs least-affected.

Charles Stewart and Co auctioneer Jamie McConachy said the light, trade and store lambs job was very good, and the market was through “that bit of a sticky patch” of the past few weeks.

“The export lambs don’t seem to have strengthened much, but certainly we are seeing better prices for the trade lambs.”

HF Richardson livestock manager at Ballarat Bernie Nevins said export and heavy trade lamb prices have recovered $3-$5, but lighter second trades, 18-19kg cwt, drier in the skin and not quite finished or a bit woolly, were $3-$4 cheaper. Light lambs were selling “unbelievable.”

“They are telling us they are having trouble selling it (export lamb) and locally it is a bit harder too.”

Elders livestock manager Graeme Nicholson said export lambs were certainly dearer than last week, but “still not firing”. He was also told exporters were finding it difficult to sell lamb.

“And they still know there is a fair few out there.”

Letting lambs get heavier in feedlots was “not necessarily the right thing to do,” he said.

“I have been taking a position of actually selling some and taking the money, depending on the client’s feed position.

“We always know that we get to a certain time toward the end of March where the weather changes – it might rain or get cold – and the lambs get stagnant and don’t do any good.”

He said Elders sold export lambs for $175 on Tuesday that were estimated at 31.5-32 kg dressed.

“A bird in the hand is worth a fair few running around in the paddock.”

He said Coles had been finding it difficult to buy lambs of the right weight – many have been too heavy – though they bought suitable lambs “absolutely in the slot” (average 22-23kg cwt) at Ballarat on Tuesday.

Sheep quality at Ballarat was mixed with more lighter sheep yarded. Most ewe mutton sold to a dearer trend to be firm to $5 up on last week, while the wethers selling mostly firm.

The NLRS said lamb quality was very mixed with good numbers of finished lambs available along with an increased percentage of lambs showing signs of dryness. The usual buyers competed in a market that was firm, but fluctuated on quality.

The NLRS said the quality of the lambs was fair to good with an even spread of crossbred and Dorpers. There were supplies of trade and heavy weight lambs, with restockers also well catered for.

It was a fair to good quality penning of grown sheep that included some good lines of both ewes and wethers. There were also a number of pens of young Merino ewes that attracted the attention of both processor and restocker orders. Market trends were generally dearer.

On Tuesday in the SA Livestock Exchange at Dublin, the agents yarded 9790 crossbred and Merino lambs, 1072 fewer than last week, and 2508 sheep, 133 less.

The NLRS said the generally very good quality yarding of lambs sold to fluctuating demand from the usual trade and processor buyers, although one processor didn’t operate. Feeders and restockers from the Eyre Peninsula, Yorke Peninsula and Mid North continue to bid keenly on suitable light weight late 2014-drop crossbreds.

The NLRS said the usual trade and processors were active and restockers bid on lighter weight lambs.

The NLRS said quality was plain with only a moderate number of prime lamb drafts and more store and light weight lambs.

Competition remained solid from a full field of buyers and the limited supply of prime drafts lifted in price, with prime trade lamb prices improving $3-$5. The better store lambs also lifted. Very light store lambs were mostly Merino drafts and made $25-$72, $5 dearer than last week. Light lambs, 17kg cwt and under, sold to processors, restockers and live export buyers for $55-$99 to be $5-$10 dearer. Trade lambs, 18-22kg cwt, lifted $3-$5, with most sales from $98-$128. The better drafts averaged 560c/kg cwt. Heavy lambs, 22kg cwt and over, sold from $105-$130, to average about 540c/kg cwt. These remained firm on last week’s rates

Wether prices were solid, driven by live export demand. Better export wethers sold from $75-$95 to remain firm and the store drafts made $75-$90. Rams again met solid competition, with ram lambs making $70-$90 and the young drafts sold to live export buyers and feeders for $41-$56. Old rams made $25-$45 to processors.