Superfine wool to gain from measurement and marketing 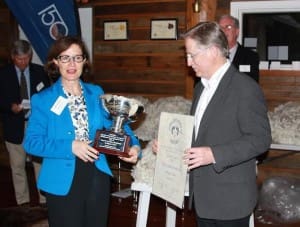 The viability of traditional superfine wool-growing was being aided electronic sheep identification, next-to-skin wool marketing and research, according to the overall winner of the 2015 Australian Superfine Wool Growers Association Fleece Competition awards.

Noel and Lyndsay Henderson’s Avington Farm commercial and stud operation at Sidonia in Victoria was presented with the prestigious Cleckheaton grand champion fleece trophy for a six kilogram skirted 16.9 micron fleece at the 4th annual ASWGA dinner in Armidale on May 2.

“I think we would all like the fleeces to be as heavy as possible, but in that style of wool at that micron, it is a pretty good result.

“It is reflecting that she is a bigger than average ewe bred from a Merryville ram that we bought in 2009 – he is a big ram and he has thrown some very good fleeces for us,” Mr Henderson said.

“We are looking to hold our micron, but we are certainly looking to increase our fleece weights and we are starting to achieve that with our superfines.”

Mr Henderson said his champion entry was a “spectacular fleece and big for that style”.

The Avington Merino Stud aims to produce large-framed superfine sheep with strong constitutions and soft, loose, pliable skins. Fleece weight and micron are key selection criteria but staple strength, length, low CV, crimp definition and nourishment are extremely important. The flock’s average micron is 15.8 with an average fleece weight of 5.2 kg for adult sheep. The operation sold a bale at 15,000c/kg and four at 12,000c/kg earlier in the year, but Mr Henderson said prices need to improve to secure superfine wool’s viability.

The fleece competition awards were divided into four categories to better represent traditional fine crimping wools, based on the Bradford score the categories were 90’s and finer, 80’s, 74’s and 70’s.

There were also winners from each region. Most of the categories were well supported, but the majority of entries were finer fleeces.

Mr Henderson said the ASWGA seminar at the University of New England before the dinner was “first-class” and focussed on the research that would lead to improvements for growers.

“There are some wonderful things happening in our industry, in terms of research and development, and there needs to be more of it.”

Mr Henderson said wool growers are embracing measurement in everything they do.

“That was one of the big messages – if you are going to manage it and improve it, you have got to measure it.

“That message is getting through finally and there was some good demonstrations of some of the techniques available.”

“We have no doubts that is what is helping us improve.”

He was confident supply and demand dynamics would swing back in favour of growers of traditional superfine wool.

“Maybe we are starting to see it now, but it needs to be sustained.”

Measurement is playing a big part in improving flock viability and he believed Australian Wool Innovation’s sponsoring of production and marketing campaigns for lighter weight next-to-skin clothing would “really pay off.”

“For the next-to-skin wear, the finer the micron the better and we are starting now to see people all over the world producing these wonderful woollen fabrics that are just fabulous to wear.”

– Allan and Carolyn Phillips of “Glen Stuart” Deddington, Tasmania, who won the 90’s and finer class and placed first in the Tasmanian region.

– Geoff and Heather Phillip of “Currawong” Tatyoon, Victoria, who placed first in the 80’s class.

– Mark and Lesleann Waters of “Riverton”, Armidale NSW, who won the Class 70’s and placed first in the New England region.

– Ian and Margaret Humphry of “Avondale” in Springhurst, Victoria, who placed first in the Albury/Wodonga region.

– Trevor and Kathy Mibus of “Glenara Merinos” Hamilton, Victoria, who placed first in the Hamilton region.

– Paul Jones and Kim Price of “Lyneside”, Bathurst, NSW, who placed first in the Mudgee region.

The award organisers thanked Australian Country Spinners and Roberts Ltd who sponsored the event again this year and to Australian Wool Network for facilitating the judging and sale of the fleeces.