VICTORIAN superfine wool producers have been developing the use of rubber rings to remove excess skin from the breeches of Merino sheep instead of mulesing them.

The technique involves capturing loose with rubber rings – usually used to castrate a lamb or remove its tail – on multiple points around a sheep’s breech area.

The captured skin then eventually falls off with the rings, effectively stretching the bare skin around a sheep’s anus and/or vulva, similar to what occurs when loose breech skin is removed by surgical mulesing. 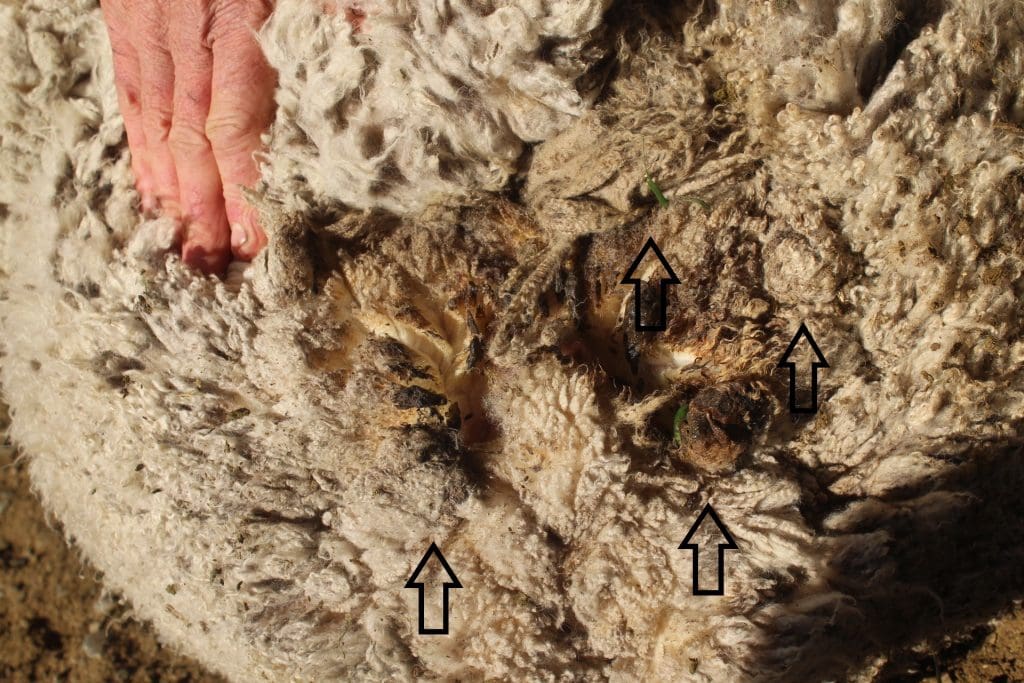 Members of the Australian Superfine Wool Growers Association were introduced to the technique by ASWGA Ararat/Barunah branch president Geoff Phillips during the recent ASWGA farm tour in western Victoria.

Because the new method does not involve the use of mulesing shears it falls outside the Australian definition of mulesing, although it could be seen as a form of breech modification. Mr Phillips likened the removal of loose skin with rings as similar to the approved use of clips, but he would now like to see an independent research trial to assess the method.

In his Rivernook property wool shed this month, Mr Phillips told the ASWGA tour visitors sheep had not been mulesed on the property for six years.

“We have been aware through the ASWGA and the links to the mills of the customers’ demand and obviously are keen to have our wool accessible to the top end of the market.

“This has been a difficult transition,” he said.

“Primarily due to the feed produced in late Winter and Spring and the dag that this can create, during this period we have developed a process using rubber rings under analgesia to remove excess skin around the breech.

“We have constantly been improving this technique and now are at a stage that the sheep are manageable from an animal health perspective and are safe for manual handling for crutchers and shearers,” he said.

“And this allows us to still apply full selection on wool quality and production.

Mr Phillips said not being able to use the ring technique would place him in an awkward position to maintain sheep in optimal health, while maintaining a strong focus on on wool quality and production. He has no intention of returning to mulesing.

Mr Phillips told Sheep Central he had been developing the ring method for 6-8 years, using up to four rings around a lamb’s breech at marking and repeating this if necessary at about five months of age at the first crutching through a sheep handler. Buccalgesic is given as pain relief.

Mr Phillips has been working with a veterinary consultant and notified the SustainaWOOL program. He is aware of another 2-3 growers who have tried the technique.

“With mulesing creating a lot of negativity, we started developing the system to try to have a pathway through that, so that we could still husband and manage our sheep.

“It has been very difficult to have those productive pastures in that Winter-Spring period and deal with that breech area,” he said.

“We just felt we couldn’t do nothing.

“We’ve got it to the stage where it is actually working.”

He assesses the end result as equivalent to what he had previously achieved with a light mules.

“The shearers and the crutchers are happy now whereas for a start we had a couple of very awkward years which involved a lot of hard work trying to find a way through.”

Mr Phillips said he is comfortable that any duress the sheep experience using the rings with pain relief is only for a short period.

“And the (treated) lambs aren’t set back anywhere like what mulesed lambs were – they seem to continue to go forward.

“But because it is such a sensitive issue, I think ideally a trial would be done to independently evaluate what is actually happening,” he said.

“That would be the ideal scenario so that there is some objective scientific evidence to say what is actually happening.”

He recognised that he could also change the Merino bloodlines he used, but to do this and retain his wool quality and production on his country would take time.

Geoff and Heather Phillips run a 5500-head Merino flock, at their Rivernook and Currawong properties, based on Sierra Park blood with some Merryville and Merryville-type, Gilgunya and Rockbank infusions.

He told farm tour participants the flock’s breeding is based on wool quality and production.

“We are simply trying to grow the best wool we can, ensuring it is on a reasonable animal with good production,” Mr Phillips said.

The said the average micron has been around 15.7 microns for several years. Last year Rivernook shore 2500 sheep 3-9 year-old ewes averaged 16.1 micron and cut 5.2kgs. At Currawong, the two year-old hoggets, and the 3-4 year-old wethers averaged 15.4 micron and a cut of about 4.45kgs.

Sheep are classed as hoggets and again as a two year-old with ewes classed out joined for prime lamb production and wethers sold to a producer near Ballarat.

“Often the wools we produce have a ‘3’ in front of them, rather than a ‘4’ and as I said it is one of the great frustrations of my life.”