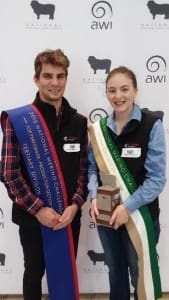 The “superfine kids” from south-west Victoria struck more than a blow for La Trobe University in Australian Wool Innovation’s National Merino Challenge at the weekend.

In her first attempt at the challenge, Belinda Amess, 19, from Minjah won the prestigious tertiary division individual champion award at the event in Adelaide.

“We were thinking the superfine kids had a bit of an edge,” Belinda said.

AWI said techniques from several well-known industry initiatives, such as MERINOSELECT, Lifetime Ewe Management and Visual Sheep Scores, were used throughout the NMC, giving students a realistic and practical insight into the tools available to growers to make more informed decisions.

Tertiary individual winner has been in the wool 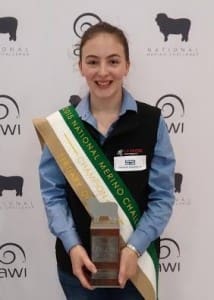 Belinda Amess grew up on her proud parents’ David and Robyn’s 400 hectare property north of Warrnambool in south-west Victoria and is in her first year at La Trobe University, studying a joint Commerce and Agricultural Science degree.

“She’s always been interested in what we do here and can turn her hand to anything,” Mrs Amess said.

Belinda has always had a strong interest in Merinos and sheep, started rousing early in her parents’ shed and also worked as a wool handler with contractor Southern Shearing. Mr Amess said she and her brother Peter have a flock of pet sheep on the home farm and have always been interested in the livestock and farm work. The Amess’ run superfine Merinos and a self-replacing crossbred flock.

“He (Dad) has been showing me the ropes the last couple of years,” Belinda said.

Belinda also did a Certificate II in Agriculture and wool handling in Year 10 with RIST at Hamilton and has started a wool classing course at the university. Although the NMC’s full results had not been released, she believed she was “most comfortable” in the wool section. The other sections included feed budgeting, condition scoring, visual traits and structure.

The challenge was really useful to meet industry experts and see the extent of career opportunities there are in the wool industry other than returning to the farm, Belinda said.

“Although it’s early days for me, areas I’m interested in include agribusiness, research and wool brokering.”

Belinda valued most the opportunity to practice the skills learned in the lead-up to the challenge and being able to meet others who had an interest in wool.

“Some of the kids I talked to they hadn’t been around sheep much, but this is exposure for them and they were loving it.” 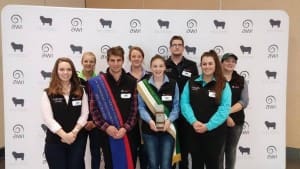 Belinda was surprised she did so well, and believed the challenge had strengthened her interest in a career in agribusiness and wool.

Edmond’s parents, Adrian and Helen, produce fine to superfine wool with their Kurra Wirra blood Merino flock. He has done his Certificate IV in woolclassing at RIST Hamilton and at high school did an ‘Overview of the Wool Industry’ course.

Edmond said the challenge helped him make industry connections, and visually appraise and select Merinos different to those he is familiar with at home.

“It was a great experience.”

He said he was interested in the genetic side of livestock and wool. 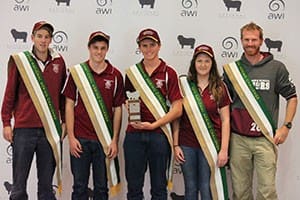 For the second consecutive year, the individual winner of the secondary school division came from Cummins Area School on the Eyre Peninsula of South Australia. Individual winner Daniel Puckridge said he enjoyed the hands-on skills developed through the NMC.

“I come from a sheep, cattle and cropping property, and am interested in doing an Ag Science degree at uni and maybe going on to be an agronomist.

“The event was a good opportunity to talk to the all the industry people and hear the plans of the other students – as well as being a competition; it was great networking event,” he said. 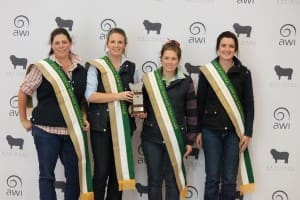 Charles Sturt University, NSW, fielded the top four tertiary students from the one institution for the second consecutive year at the 2015 challenge. Team member Brooke Cowan, 22, a final year Bachelor of Animal Sciences student from Blayney said the four final team members were at their first challenge.

“It was pretty good, very exciting — I don’t come off a sheep property so it is all new for me.

“I want to end up working in the sheep and wool industry, so it is good to go and get some experience,” Brooke said.

“That’s pretty new for us because we don’t actually study wool at uni, it’s more of a TAFE woolclassing subject.”

This year the university sent 22 students to Adelaide and only one student, Dione Howard, was a past challenge competitor.

Other highlights of the NMC program included a shearing demonstration from world champion shearer Shannon Warnest, a presentation by Deanne Irwin of Australian Wool Network on the importance of effective wool handling techniques and a careers session with young professionals already in the industry.