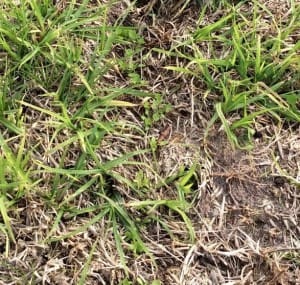 Summer-sown legumes have germinated in a Western Australian trial aimed at boosting the value of long-term kikuyu grass stands on deep coastal sand country at Esperance.

In a Meat and Livestock Australia-funded trial, farmer members of the ASHEEP group have been investigating legume options to traditional sub clover, to invigorate kikuyu grass stands.

Sub clover on Western Australia’s south coast is prone to a disease known as red clover syndrome, putting the legume under stress and causing stands to die out before the end of the season as early as June, leaving farmers with soil nitrogen-fixing and feedgap problems.

On September 24, the first day of a two-day field day series, ASHEEP will present the results of the first trial legume sowings, at the ‘Legumes in Kikuyu’ trial site near Condingup, 70 kilometres east of Esperance.

The trial – one of MLA’s Producer Research Sites – aims to determine the benefits of incorporating clovers and serradellas into long-term Kikuyu paddocks on deep coastal sands in the high rainfall areas around Esperance. The effects of winter and summer sowing on the establishment of the legumes are also being compared.

Farmers in the area are trying to increase production on in the kikuyu stands and creating a year-round feed source. They want to find legumes that can fill the winter pasture feed gap while fixing nitrogen to boost kikuyu growth. But in the trial’s first year, a dry start to the season meant that the hard-seeded summer-sown legumes failed to germinate until late July.

Researchers had hoped that after chemical suppression of kikuyu on the trial plots in early March and normal summer rain would allow initial weed control, after which the Margurita Serradella and Bartolo Bladder clover that was sown in March would germinate with subsequent autumn rainfall. The same varieties, along with Dalkieth sub clover and Santorini Serradella, were also sown several months later in June. But minimal summer and autumn rain made for a slow start and an anxious wait for the legumes to germinate, ASHEEP said. Though patience has paid off and the summer and June-sown legumes have germinated and persisted.

The preliminary trial results will be available and attendees will have the opportunity to discuss the management of establishing legumes in kikuyu. Farmers will be able to see how the process and trial results to date might fit into their own system at the field day from 10.15am to 11am at Alan Hoggart’s property, The Duke, on Orleans Bay Road, Condingup.

ASHEEP said the trial has been managed in a way that made it as close to current practices as possible. The site is run by host farmer, Alan Hoggart, who, with the help of an agronomist, makes all the management decisions in relation to weed control, grazing and fertiliser application. MLA’s Producer Research Sites program joins researchers with producers to test ‘if’ and ‘how’ research findings can be applied on-farm, ASHEEP said.

Several farms to be visited during two days

On Thursday, September 25, the properties and trials visited will include Wayne Lewis’, nematode trial, with nitrogen and sowing time strips; Simon Stead’s trial on regenerating Biserrula and Bartolo Bladder clover, and Serradella and herbicide strips; Scott Welke’s trial on regenerating Serradella, Bartolo and Biserrula; Scott Pickering’s one hectare plots of Bartolo Bladder clover and Biserrula, and also then to Mark Walter’s farm to look at his Bladder Medic-oats mix and vetch, Grain and Graze 3, and a discussion on alternative legume pastures.