FORWARD wool markets opened briskly in another steady week of auctions, with all qualities holding firm against a marginally weaker US dollar.

Merino cardings rose 3 percent to their highest level on the AWEX index in more than 12 months.

The forward markets opened briskly on Monday, with interest across all finer wool offers out to April 2023. The mood was buoyant, with buyers and sellers anticipating a strong spot market opening.

The relatively flat market led to a bit of a stand-off. Growers understandably are focused on getting some Spring cover. With risk still in the minds of buyers, a strong nearby rally is required before we see the resistance levels of 1700 cents for 19 micron and 1300 cents for 21 micron significantly breached.

The week finished with the prompt bid and offers tight with the mid-points around 20 cents under cash reflecting the ongoing risk concerns.

The most interesting trade for the week was a 17.5 micron put option for December 2022 maturity. Strike price was 2300 cents and the premium 85 cents. Although the strike is well under the current spot level, the graph below illustrates the thought behind the strategy. The spot price for 17.5 micron is at the 90th percentile for the last 12 years and the break-even near the 75th percentile. Looks like fair value insurance. 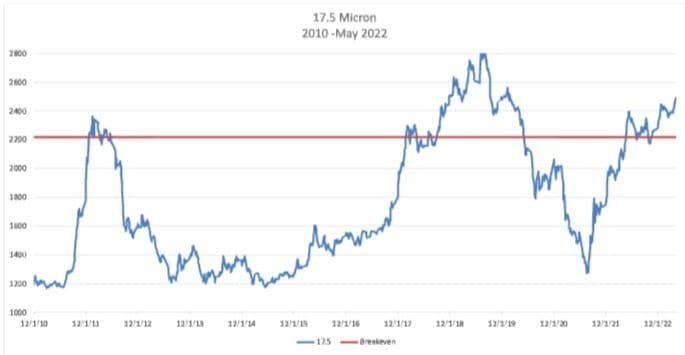 Anticipated levels next week remain stable with the result of this weekend election predicted to have little impact.