IT was another interesting yet somewhat confusing week on the spot and forward wool markets.

The spot auction market opened with a bang Tuesday and all qualities rose substantially, with the finer wools most affected.

This action indicated the likelihood of a sustain rally, but unfortunately this wasn’t forthcoming. Wednesday’s auctions failed to follow through. Finer qualities, 18.5 microns and finer, maintained their momentum, but broader gave back some or all of their gains.

On reflection, this week is merely mirroring a pattern that has been established over the last three months. (see table below).

Since the rapid rise in prices in January, the spot and forward markets have stabilised somewhat and been travelling on an ungraded road rather than rollercoaster of 2020. The forward markets have traded flat to a premium and continue to be bid that way out to June 2022.

The further benefit of the tight trading range has been the reduction in volatility. Volatility was peaking at over 50 percent in November, but has slipped to below 20pc in March and continues to be calculated at lower levels. This has seen a willingness of exporter/traders to once again price options for growers.

The first option for a significant amount of time traded on Riemann with a 19 micron Put option for July maturity with a strike of 1600 cents trading for 50 cents. With the spot auction closing for the week at 1585 cents, this appears fair value for both sides.

Current bidding levels (flat to cash until Christmas) suggest a continuation of the established pattern in the forwards and should present growers with opportunities in both the outright forwards and options. 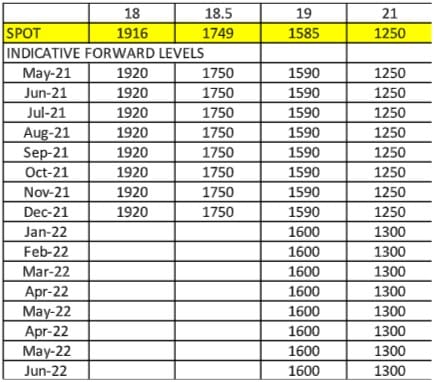