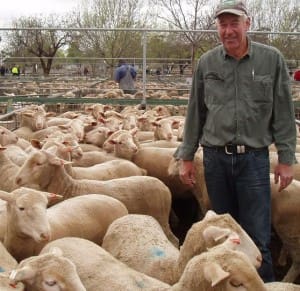 Andrew Marshall from Ouyen with his 58 old lambs that fetched the top price of $140.00.

Lamb supplies decreased at major saleyards mid-week, with only small increases at other markets, helping a lift in trade and light lamb values.

But quality was maintained in the new season offering, with an increase in weight in some centres boosting export processor demand and continued strong restocker interest adding to the competition.

The national lamb indicators again highlighted the strong processor and restocker demand for trade, light and Merino lambs as the season forces lambs into saleyards in some areas.

After Thursday’s sales the national indicators were:

In NSW on Wednesday at the Central Tablelands Livestock Exchange at Carcoar, agents yarded 5250 lambs, 1000 more than last week, and 2500 sheep, 700 fewer.

The NLRS said the much better quality yarding had some top lines of heavy weight and trade weight new season lambs, along with a reasonable selection of old lambs. There were also fair numbers of plainer lightweight lambs and hoggets.

The NLRS said the better selection of young lambs included most showing good condition and finish across a range of weights. Old lambs were mixed but included a few better shorn drafts.

The mutton section included a good run of off-shears Merino wethers, along with a mixed selection of light and medium ewes and an odd pen of heavy weight crossbreds. It was a generally solid market and prices averaged firm to slightly cheaper. Medium and heavy ewes made $60-$84 to processors, while a good line of aged first cross ewes made $92. Medium and heavy Merino wethers ranged from $65-$90 for most mutton, to average 290c/kg-315c/kg cwt.

The NLRS said new season lamb numbers decreased the most, with 19,550 head penned, but quality was outstanding with plenty of young lambs weighing above 24kg carcass weight. Old lambs were in shorter supply and quality was quite mixed over all weights and grades. All the domestic buyers operated, but supermarket competition was limited. Export processors operated strongly, benefiting the heavier trade weight category.

New season trade lambs were well-supplied and competition varied with prices softening as the sale progressed. Lighter trade weight lambs were in reasonable supply, and the domestic and export buyers were eager, paying from $90-$119. Medium and heavy trade lambs were well-supplied and prices were generally $1-$3 dearer with the heavy trade lambs averaging 481c/kg cwt. Heavy and extra heavy young lambs attracted strong competition from major export buyers with prices lifting $7, selling from $121-$145, with the extra heavy lambs averaging 447c/kg cwt.

Old lamb quality improved with increased drafts of well finished shorn lambs and they sold $4 dearer, making from $83-$125. Heavy old lambs were in limited numbers and prices ranged from $115-$143, to average 438c/kg cwt.

Trade weight Merino lambs were well-supplied and demand was steady with most grades unchanged. Merino lambs, 20-24kg, ranged from $76-$110.

Mutton quality was fair with all weights and grades represented. Merino ewes suitable for the trade were well-supplied and sold $2 dearer, averaging 326c/kg cwt. Heavy sheep were in good numbers and bidding was strongest from northern exporters with prices generally $4-$8 dearer. Heavy ewe mutton sold from $85-$105.60 while Merino wethers made $85-$110, to average 341c/kg cwt

The NLRS said quality was good across the new season trade weight and heavy lambs, considering current seasonal conditions. Large numbers of young lambs suitable to processors and restockers were penned, selling firm to restockers and a few dollars easier to processors. The usual buyers operated keenly in a mostly firm market.

Restockers were active, with lambs going to Hamilton, Birchip and Ballarat areas for mostly $65-$88.50, and young Merino ewes for $83.50. 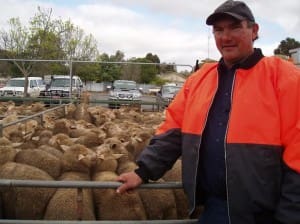 Matthew Wegner from Karoonda with the pen of his 108 sucker lambs that topped the sale at $138.00.

At Ouyen on Thursday, agents yarded 12,000 lambs and 3445 sheep, with overall lamb prices firm on rates from the last sale two weeks ago.

The NLRS said overall prices for the light to trade weight 2 and 3 score lambs were unchanged to be $2 cheaper, while the heavier lambs had more competition and sold around $8-$10 dearer at 420c/kg cwt.

The NLRS said 2300 new season lambs were offered. Quality was mixed, with some good heavy ewes and limited supplies of prime lambs. Much of the yarding was in store condition. Lamb supplies included some large drafts of very light young Merino lambs. Prices were mixed, with better quality drafts firm, but plain and store drafts cheaper.

Ewe prices firmed slightly after last week’s falls. Heavy 3 and 4 score ewes made $64-$88, up slightly. Prime trade mutton made $46-$88, or $45-$80 bare shorn, $1 easier. Light and very light ewes made $25-$54, to be up to $8 cheaper, largely quality related. The wethers were mostly in store condition and lacked live export competition.

Limited heavy weight mutton drafts sold for up to $85 to processors, with the majority going to feeders and restockers at similar prices. Better-framed drafts made from $50-$73.50, with smaller framed and immature drafts selling from $40-$59. Rams remained close to equal.