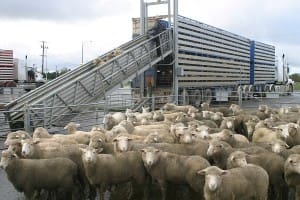 d heavy lambs sold well, and there was continued restocking demand at saleyard sales across the country last Friday.

Only rates for quality heavy lambs and domestic market lines showed significant positive price movements in some centres, with more seed-affected and dry-skinned lambs being yarded in all weight categories.

The NLRS national lamb indicators also reflected the relatively stable demand for restocker and Merino lambs and the demand for quality trade or heavy lambs in saleyards. Most lamb indicators made significant gains in the week up to November 7, including six cents for restocking types, 12 cents for Merino lambs and 10 cents for light lambs. Trade lambs lost four cents and heavy lambs dropped two cents, over the week.

AuctionsPlus numbers last week were boosted to 57,520 sheep and lambs with 18,500 head offered in the inaugural Farmgate Store Lamb sale on November 6. Store lambs were the week’s highlight with 92 percent clearance recorded in the feature sale.

Merino lambs were well-represented in the feature sale as well as regular Tuesday and Thursday sales, with prices ranging from $29 for young light lambs to $80 for well-grown Autumn drop, Ridgway blood shorn lambs weighing 47kg lwt, and an average price of $56. Young Merino ewe prices eased this week, selling from $57 to a top of $147 for Gullengamble blood 14-month-olds out of Wellington.

The NLRS said lamb quality continued to be good, except for an increase of dryness in skins. There were mainly trade and heavy lambs penned and they were mostly new seasons. There was a significant increase in supply of store lambs suitable for the restockers. All the buyers operated, except for one, and competition was solid, resulting in a firm market.

Light lambs to the processors averaged $85.50, while store lambs ranged from $79-$92, up $1-$3. Medium and heavy trade weight new season lambs were firm to slightly cheaper in places and averaged from 462c/kg-470c/kg cwt.

Most of the heavy trade weights sold from $104-$111. Heavy weight new season lambs were firm and averaged from 430c/kg-460c/kg cwt. A pen of extra heavy new season lambs topped at $132, with an estimated carcass weight of 30kg.

The NLRS sa
id there were 3100 new season lambs penned and quality was reduced slightly from the previous sales, with many showing signs of dryness. There was an increased percentage of Dorper lambs penned along with a greater number of shorn new season lambs on offer. Most of the usual buyers competed in a fairly steady market that varied according to quality.

The sheep were mostly crossbred ewes carrying plenty of weight. The quality of the Merino ewes on offer was reduced from the previous sales, though prices were stronger. Merino ewes sold from $72-$97. Crossbred ewes received from $75-$105.

The NLRS said the quality of the young lambs varied from good across most of the trade and export weight types, to plain on the lighter pens. There now are more lambs presenting with drier skins and some seed contamination as the season progresses toward summer. The usual field of export and domestic buyers competed, and prices across the yarding were very similar to a week ago.

Some of the best quality domestic lambs did show a slightly dearer trend of $1-$4. The market reached a top of $126 for young export lambs — one of about 12 pens of heavy lambs that sold above $120. Light weight lambs received solid support from both restockers and processors, with most sales from $72-$88. There was a feature line of well-bred young shorn lambs which sold strongly at $84-$92 to restockers and were among the highest priced store lambs on a carcase-weight basis on the day. The bulk of the better quality trade weight lambs sold from $95-$118.

There were only limited pens of heavy lambs in the yarding, that sold to a top of $126. Most of the quality slaughter lambs were estimated at 440c/kg-455c/kg cwt, with the top runs of well-bred and finished domestic lambs making a slight premium at about 465c/kg cwt. The sheep sale wasn’t quite as dear as the previous week, with most ewes $2-$3 cheaper. Restockers paid to $125 for a small pen of young crossbred ewes, while heavy first cross ewes to slaughter made $65-$85. The medium weight pens of ewes mostly sold from $50-$70, averaging about 270c/kg cwt across the yarding.