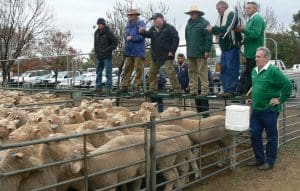 The Landmark team selling lambs at Ouyen this week.

Trade lambs sold up to $5 cheaper in all New South Wales saleyards except Wagga on Wednesday and Friday, and heavy lamb prices also dipped by up to $8.

In Victoria, trade lambs sold $2-$4 dearer at Hamilton and made up to $5 more at Horsham.

Despite waning restocker interest, speculative exporter buying of light lambs, especially at Wagga, also helped to keep the ESDI for lighter slaughter lambs moving upward, with restockers paying above 700c/kg for some lines at Wagga.

However, despite the quality and costing fluctuations between northern and southern eastern states saleyards on trade and heavy lambs, both ESDIs remained above 610c/kg, with some trade lamb lines with skin values of $10-plus making above 650c/kg on the ground.

Mutton prices generally drifted lower in saleyards as supplies tightened further, with the ESDI losing 6 cents to 397c/kg and the national indicator falling 7 cents to 391c/kg.

In New South Wales at the Central Tablelands Livestock Exchange at Carcoar on Wednesday, the agents yarded 13,600 lambs, 6200 more than last week, and 3800 sheep, 1570 more.

The NLRS said lamb quality was mixed with some heavy well-finished lambs in good condition and plenty of plainer lines. There was a handy supply of heavy lambs, but most were trade and store lambs. All the usual buyers operated in a slightly cheaper market.

The NLRS said lamb quality was good in the trade and heavy runs. There was a reasonable number of plainer lambs. Most of the better lambs were trade weights. Not all of the usual buyers operated in a cheaper market.

The NLRS said the yarding lifted significantly after wet conditions last week hampered producer efforts to move stock. It was a good mixed offering for a winter yarding.

Prices for trade lambs were firm, while heavy lambs lost some traction. There were more secondary lambs and some lots exceeded agent expectations. All major export and domestic processors operated fully.

Well-finished supplementary-fed trade lambs attracted strong bidding, while grass-finished pens at times struggled to appeal to all buyers due to lack of fat cover.

Trade lambs generally sold $3-$4 dearer and averaged 625c/kg cwt. Merino trade lambs sold to solid demand regardless of skin length at $113-$158. A southern export processor had the greatest influence over the lighter weight categories, buying the bulk of the offering on the prediction of a heavy rain forecast. Light weight lambs sold to processors tracked dearer at $85-$118. Restockers were again cautious, with only limited numbers returning to the paddock and sales ranged from $67-$120.

Heavy lambs were keenly sought by several domestic processors, putting a floor in prices at an average of 613c/kg cwt. Extra heavy lambs lacked weight for the first time this season, with only limited supplies over 30kg cwt. The better finished heavy pens sold at $180-$211, averaging 605c/kg.

The mixed quality offering of sheep contained all weights and grades. The market for heavy crossbred ewes lost its intensity of past weeks and prices fell to $19-$32, or 388-414c/kg. Light and medium grades of sheep generally sold $1-$4 cheaper to average 330-358c/kg.

The NLRS said lamb quality was mixed, from average to very good for this time of year. The usual buyers attended apart from one domestic processor and demand continued to strengthen slightly.

The NLRS said lamb quality was average to good, with the usual buyers operating in a firm to dearer market.

The sheep offering covered all grades, selling to keen competition and a few dollars better in places. Heavy Merino wethers in near-full wool sold to $137. Restockers paid to $90.50 for lighter Merino wethers.

At the Ouyen Livestock Exchange on Thursday, the agents offered 8755 lambs and 1461 sheep.

In Western Australia at the Katanning saleyards, the agents yarded 5379 lambs, 271 fewer than last week, and 4000 sheep.

In Queensland at the Warwick saleyards on Wednesday, the agents yarded 1830 lambs and hoggets, and 1280 sheep.

Agents quoted the larger yarding of lambs as dearer for export heavy lambs and firm on lighter lambs. Quality declined in the larger sheep offering and the market was firm-a shade easier.