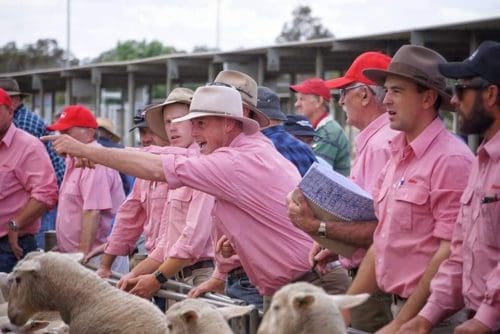 LAMB prices surged at saleyards in Victoria early this week, with heavy Merinos and crossbreds at times making equal money on a carcase weight basis.

MLA said prices lifted across most reported categories and markets for Victorian lamb sales this week, supported by key feeder and processor buyers in Ballarat and Horsham.

Merinos in Bendigo offered positivity for the lighter stock entering the market, as buyers favoured these carcase weights compared to the heavy trade crossbreds, MLA said.

The price movement helped produce a weekly lift in the Eastern States Daily Indicators for all lamb categories up to Thursday, except for restocker lambs.

After Thursday’s saleyard sales, despite dropping or holding on the day, the ESDI for heavy lambs had risen 15 cents to 786c/kg, by 17 cents to 827c/kg for light lambs and by 8 cents to 812c/kg for trade lambs. The Merino lamb ESDI had risen eight cents week-on-week to 812c/kg. The restocker lamb ESDI suffered a 43c/kg drop up to Thursday, closing at 869c/kg.

This week, dearer prices were reported across all Victorian lamb sales, with Bendigo and Horsham yardings easing by 7000 and 3270 head respectively, while Ballarat’s yarding lifted by 1156 head.

Elders Bendigo livestock manager Nigel Starick said he could not explain the lift in lamb prices, except as evidence of continued strong demand.

“I can’t see any other reason why.”

Mr Starick said Merino lamb prices have been strong for the past 4-6 weeks, with abattoir spot prices similar for Merino and crossbred slaughter weight lambs.

“I’ve actually been sending Merino and crossbred lambs to an abattoir at the same rate.

“I’ve never ever seen that,” he said.

“These are averaging around 27-28kgs cwt and I think there is an abundance of lambs over 30kg cwt, which has been causing the guts ache in the market.

“But with all these contract lambs coming into play in May/June/July, and all the contracts are full, there are still going to be a heap of heavy lambs, yet the yards have taken a bit of a lift.”

MLA said processors were the key buyers at Horsham on Wednesday, accounting for 49pc of the yarding, or 4481 head. These lambs averaged 25.7kg at 797c/kg cwt, or $206/head. The increase of 1638 head week-on-week in this category did not deter buyers, as processors continue to value quality stock in the heavy trade weight category, MLA’s NLRS reporters said. The restocker lamb portion of the yarding declined by 83c/kg week-on-week to average 749c/kg cwt, or $130/head. Looking ahead

MLA said the quality of lambs hitting the market will be an important consideration for restockers and processors to watch as cooler conditions hit Victoria in the coming months and will drive lighter carcase weights.