Store lambs sell to $103 in Victoria on AuctionsPlus sale

The top-price was paid for 1320 July-August drop mixed sex White Suffolk-Merino cross lambs estimated at 17.9kg cwt within a range of 25-48kg lwt and mostly score 2 and 3. The lambs from Boonerah PL and offered by Charles Stewart and Co were by White Suffolk rams out of Wallaloo Park ewes. They had been grain-imprinted on their mothers and estimated to have gained 350gms/day since birth. 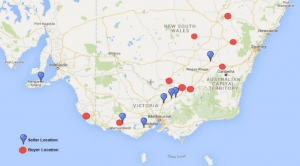 Lambs were offered mainly in south-west and northern Victoria, but also on Kangaroo Island in South Australia and Wallendbeen in New South Wales. They sold into south-east SA, south-west Victoria, southern and eastern NSW.