Store lambs and breeding ewes in demand on AuctionsPlus 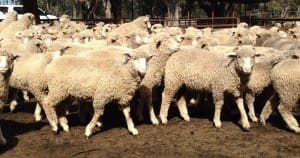 This contraction and continued strong optimism in the lamb market led to increased prices for store lambs and first cross ewes online.

She said continually increasing beef prices are also expected to have a positive impact on both domestic and export demand for lamb.

Of the 4,400 sheep and lambs offered in Queensland last week, 50 percent are heading to New South Wales and 30pc were purchased by South Australian buyers.

Lamb market confidence from restockers was also reflected in the NLRS Eastern States Daily Market Indicators for last week, with only restocker, light and Merino lambs recording overall positive movement for the week.

The ESDI and national indicator for mutton finished on 381c/kg.

The NLRS said lamb quality was good, especially in the heavy new season lambs, which were well-finished. Mainly trade and heavy weights were penned, including about 7000 new season lambs. The number of old lambs was limited, but there was a handy supply of store lambs suitable for restockers. The usual buyers operated, plus one extra. Competition was easier, but improved as the sale progressed, with market following a cheaper trend.

The NLRS said lamb numbers increased as the first major drafts of young lambs were offered. About 1000 young lambs were yarded, giving buyers a much better selection of trade weight slaughter lambs. The offering of old season lambs was very mixed and comprised mostly secondary types in small and odd lots.

The selection of old lambs was very mixed for quality and breed type, with prices mostly cheaper week-on-week.

The sheep sale showed a dearer trend for the main lines of medium weight Merino ewes and wethers in good skins, which sold from $103-$109 and made over 400c/kg cwt at times. Extra heavy crossbred ewes were cheaper at $97-$115.