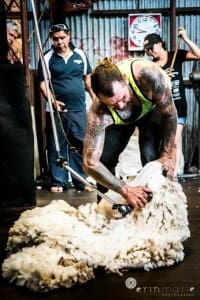 WEST Australian sheep shearer Beau Guelfi knew his latest bid for a new eight-hour solo Merino ewes record was over almost before it began in a frighteningly-hot woolshed north of Perth on Saturday.

But it’s not putting him off and he’s in for another go as soon as possible, if someone can come up with the right sheep.

“I’m looking,” he said as he prepared to leave Yathroo, where his bid for the eight-hour solo Merino ewes record of 466 ended at lunchtime. All agreed at the halfway point that after just two of the four scheduled two-hour runs the record set in 2003 was way out of reach.

Needing to average at least 57.375 sheep an hour to break the record, he had shorn just 218 — an average of 54.5 an hour — and was heading for a tally about 30 short of the goal, unless things improved dramatically.

There had, however, been no sign that would happen. After shearing 110 in the breakfast-morning smoko run, he dropped even further off the pace in the run to lunch, adding just another 108 to the total.

Moora contractor Rhenice Wilkie said the main problem was the “sticky” bellies and points on the sheep.

“He worked his heart out, but unfortunately it didn’t come off.”

She said his WA supporters would be looking for some suitable sheep for another record attempt.

Australia-based New Zealand shearer Cartwight Terry, who was at Saturday’s attempt, had morning runs of 114 and 119 when he set the record 13 years ago.

“We knew it was an uphill battle from the start with the sheep. But when you commit you just have to go ahead, so we just had a crack anyway.

“It was hot…we had to keep them all in the shed for the weekend beforehand, due to rain,” Guelfi said.

“It had been a poor season for feed due to a dry spring, and the Merinos are so susceptible to conditions.”

Asked if he knew early on that a record tally might not be achievable, he said: “Yeah, the bellies were just so unbelievably sticky.”

Guelfi said he would “definitely” like to make another attempt this season.

“It’s just finding the sheep and having the right conditions pretty much — I’m looking.”

Guelfi prefers record attempts and speedshear competitions to the longer-form show competitions, although he has shorn six home-and-away trans-Tasman shearing series’ for Australia against New Zealand, including test matches at the Golden Shears in 2003, 2006 and 2008.

The 36-year-old’s been in the records game almost 20 years, since at the age of 19 he set a Merino lambs record of 467 in eight hours, and signals the current record of 570 lambs, set in West Australia late in 2002, is on the radar.

“I wouldn’t rule-out any attacks on the ewes or Merino lamb records in the near future,” he said.

“Taking time out with the kids now for a while.”