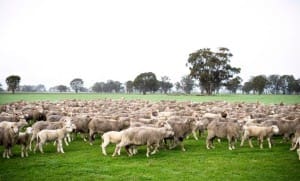 AUSTRALIAN sheep and wool producers can get a unique snapshot of fibre and meat market prospects to a backdrop of state seasonal conditions in the Ag Answers 2015 National Sheep and Wool Update.

The report, launched by Rural Bank and Rural Finance’s specialist insights team Ag Answers, provides producers and industry with a state-by-state analysis of the sheep and wool sectors.

The update provides farmers with vital countrywide statistics and analysis of key trends in global and domestic markets.

General Manager Agribusiness for Rural Bank and Rural Finance Will Rayner said that while conditions varied across the country, particularly in drought-affected areas, the national picture for the Australian sheep industry was the strongest it had been for many years.

“Advantageous market conditions combined with a national flock of less than 70 million has reinvigorated the sheep and wool industry, leading to above-average prices and increased international demand for its products,” he said.

The update suggested high commodity prices and a lower Australian dollar, combined with a buoyant wool market and renewed international demand for Australian lamb, has produced an extremely positive outlook for the Australian sheep industry.

Strong export demand, declining flock size and expectations of a shift to flock rebuilding are likely to keep sheep and lamb prices above average. The wool market has enjoyed a recent rally and the Eastern Market Indicator finished the financial year at 1263 c/kg, up 24 percent, the update said.

Wool prices are expected to remain supported given the declining flock size (estimated to have just fallen below 70 million), a lower Australian dollar and continued export demand.

The update said lamb exports increased by 43pc from 2013 with greater demand from the USA and China. Total lamb, mutton and live sheep exports increased in 2014 and exports have remained strong in 2015. Lamb exports to the USA been helped by high American meat prices and a lower Australian dollar, the update said. Nevertheless, exports are expected to slow if supply tightens. Mutton exports to China declined by 21pc in 2014 but were offset by significant increases in exports to the USA and Russia.

Complementing the sheep and lamb price growth is the recent resurgence in Australian wool prices, meaning fewer Merino sheep are expected to be sold for meat, the update said, although this situation varied between states. The export market for lamb, mutton and live sheep has remained strong in 2015 with exports to the USA increasing significantly. Wool exports decreased by 10pc in 2014, with exports to China down 14pc. However, demand from China increased during the first months of 2015, up 22pc compared to this time last year.

“The rise in wool prices is extremely encouraging and expected to improve profitability for wool producers this year,” Mr Rayner said.

“While challenges remain, sheep producers can deservedly be optimistic about the future of the industry.”

To view the National Sheep and Wool Update, visit: www.ruralbank.com.au/sheep-wool-update