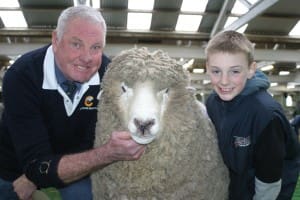 Jim the Corriedale ram must like Ballarat – he always shows his best there.

“He has really come up as a two-year-old and he has never been beaten here.

“He just got rolled in Bendigo (at the Australian Sheep and Wool Show).”

Mr Risbey said the stud had sold semen from the ram to studs in South America and throughout Victoria, and he was fielding interest from New Zealand.

Judge Grace Calder from Hastings said the ram had grown out well and was an exceptional example of the breed.

“He is huge and has an even fleece all over him.”

The champion shortwool interbreed ewe of the sale was also a White Suffolk; a 13-month-old ewe from Tim and Basil Jorgensen’s Mertex stud from Antwerp. Judge Alan McCartney said the ewe excelled in muscle, statue and conformation correctness.

The Ballarat Sheep Show fielded just under 300 entries, including the re-inclusion of Border Leicesters and the show’s first Australian White sheep.