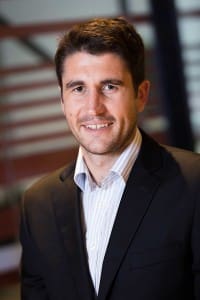 AUSTRALIA’S spring lamb prices have risen by more than 160c/kg cwt in the past three years despite production increasing, Meat and Livestock Australia reported today.

During 2012, the Eastern States Trade Lamb Indicator dropped to a low of 303¢/kg cwt, while encouragingly, despite the numbers on the market increasing, the indicator in the 2013 spring low was 86¢/kg cwt above the year before, at 389¢/kg cwt, he said.

“This trend continued in 2014, with the indicator falling to a low of 452¢/kg cwt (up 60¢/kg cwt from the year before), and again, the higher prices were despite a greater number of lambs on the market.

“The trend for 2015-to-date has been slightly different (as a result of heat and rainfall volatility), with the spring low point coming in October rather than November like in the previous three years,” he said.

Mr Thomas said a myriad of factors have led to the progressively rising lamb prices, including the devaluation of the A$ in the last 18 months, decreased competition from NZ, and the generally growing demand for Australian lamb. 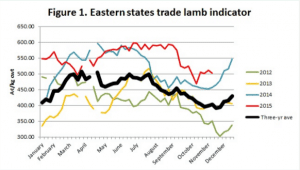 Mr Thomas said the Eastern States Trade Lamb Indicator tended to follow a seasonal pattern of rising sharply during the first two months of the year, before peaking in March and April, then trending to an annual low in November. This is illustrated in Figure 1, through the black three-year average line.

“Unsurprisingly, the seasonal low is driven by the larger number of lambs on the market due to the spring lamb flush, while conversely, the price peaks are underpinned by diminishing supplies.

“While the stock availability influences the general trend, there is always volatility, influenced largely by rainfall, pasture and water availability and the broader trade environment,” he said.

Mr Thomas said despite the continually rising annual low-point in lamb prices in November, it is still well below the point at which processors typically report market demand resistance — above 600c/kg cwt in saleyards or over-the-hook.

“This may be the maximum level at which processors can trade with under in the global trading environment.”

He said the movement of spring lamb price toward the 600c/kg mark is limited by the huge increase in supply during that period.

“While we can get up to 600c/kg and maintain that level for some time (earlier in the year), really helping the market is the fewer lambs available then.

“But at this time of the year I would be very surprised, over the next couple of years anyway, if that lower limit eventually got up to 600c/kg,” Mr Thomas said.

“The other things to take into consideration are cold storage volumes and capacity.

“Because at the end of the day when we do look at our export volumes, they are relatively consistent.”