A SPIKE in Merino skin prices is less a sign of improving pelt demand and more a reflection of a lift in wool rates.

Figures from the National Livestock Reporting Service show Merino skins with 1.5-2-inch wool length rose from 1300c in May to 1742c in June, a lift of 30 percent. 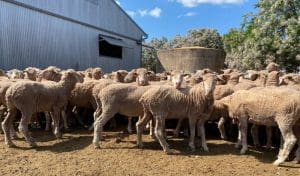 And in July, NLRS figures show Merino skins with a wool length of three inches or more averaged 2633c for lines which were free of vegetable matter while even those which did have heavy VM averaged 2400c.

But those hoping there will be a corresponding lift in other sheep skin values may be disappointed, with industry sources indicating flat demand for sucker and crossbred categories.

Australian Hide, Skin and Leather Exporters Association executive officer Dennis King said even a Merino skin with a wool length of one to one and a half inches had some value due to its wool.

“The wool value on skins is the big thing at the moment,” Mr King said.

“The broader skin market has settled a little at the moment as we come into the northern summer holidays, but it will pick up again when we lead up to the northern hemisphere winter.”

But Mr King said there was no new demand for skins, as clothing trends lean away from skins and hides and into synthetics.

“The anti-leather activist movement is so rampant, and brands (that use leather and skins) look at that, so it impacts on demand and it’s an ongoing issue,” he said.

Mr King said some processors were even stockpiling skins until a market was found or prices lifted.

Lamb skin values hit 2500c for the best heavy Merinos (26-30kg) at one of the eastern state’s biggest selling centres last week at Wagga Wagga, but other skin values are stagnant – albeit higher than the start of the year.

New seasons lamb skins which traditionally attract a premium were quoted as low as 300c by the NLRS at the Wagga Wagga, NSW, market with most making 700-1000c.

He said feedback from the organisation’s survey of skin buyers had given three reasons for the lift in Merino skin values.

“There is a seasonal element in there, with the supply of skins dropping over winter,” Mr Bignell said.

“However, it’s largely to do with the lift in wool prices with the rise in the Eastern Market Indicator playing a big role,” Mr Bignell said.

“But there is also feedback that demand was increasing globally as countries began to open up post COVID.

“There is a recovery in sales of clothing, cars and furniture with almost the feeling that if people can’t travel, they will buy something.”

Old lamb skin prices did lift in June, but were only averaging 534c/kg, well short of the 2000c/kg attracted by the best Merino pelts.

“We have not seen that lift for other categories of sheep skins and have no real indication of where prices might head,” Mr Bignell said.

“The fact the Merino skin prices are the highest they have been since 2019 is encouraging but it’s certainly not across the board, and we are not getting any information about where prices may go.”

“Those skins will all have the wool removed, so the prices are about wool recovery,” Mr Matters said. “It is the wool buyers that are out there trying to buy the skins.”

Mr Matters said high rates for sucker skins of $25-$30 were a thing of the past when Turkey was a big customer.

China is now the major buyer of Australian sheep skins, with Turkey and Russia only minor players.

Mr Matters said there was still demand for lamb skins for finished wool-on products including in the medical field and for footwear, but it was not as strong as the past.

“Prices for all skins are a lot better than they were 12 months ago, where they were making $2 to $3 and now similar skins would sell for $7-$8,” Mr Matters said.

“The big prices are being paid (for Merino skins) by people who want to recover the wool.”

Corcoran Parker Corowa, NSW, livestock manager Clynton Rixon said it was difficult to nominate to clients how much skins were going to make.

“We are telling our producers that sucker lamb skins are worth $6-$8 and up to $20 for really good Merino skins,” Mr Rixon said.

“I sold some Merino ewes over the hooks and got $20 skin value for them in the past week so that’s where the market is.”

Mr Rixon said traditionally skin buyers paid a premium for sucker skins, but this was not evident yet in the suckers he’d seen sold.

“The whole skin market was very soft six months ago so it’s good to see a lift even for some categories,” he said.