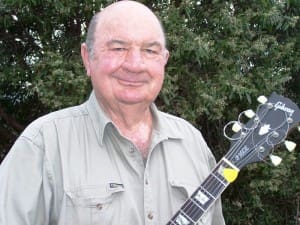 He wanted sheep genetics research to continue, but believed if more of the available money was spent on technology transfer in the area the industry and its people would be much more profitable and sustainable.

“There should be a somewhat increased percentage spent on technology transfer of existing and new information to industry and a corresponding reduction in research.

“It’s not a cut as such, just a re-allocation of resources, with a little more going into technology transfer and adoption.”

Mr Le Feuvre also believed those granted industry money for extension or technology transfer should have to prove their efforts were effective and achieved real on-farm results.

He might be six months into retirement and facing a life of fishing, some singing and writing – but the 72-year-old Scorpio still has some things to say and with a sting in his words.

After 51 years in the sheep industry, the former Qld DPI sheep extension officer and developer of WormBoss for the Sheep CRC is now a full-time carer for his 101-year-old father Stan in his parent’s house by the Caboolture River, Queensland.

Renowned for his effective, but at times unconventional communication style and dedication to technology transfer, Mr Le Feuvre is not retiring from saying what he thinks.

“If I were to say one thing about the sheep industry and particularly the wool industry overall, is they would do themselves a big bloody favour if they stopped spending so much money on research and started adopting what is already been proven.”

Uptake of genetics in the wool industry is appalling

Mr Le Feuvre said the uptake of genetics within the sheep and wool industry is appalling.

“A lot of the so-called leading Merino breeders are at fault, they rejected it, they couldn’t be bothered understanding it,” he said.

“Helen Newton Turner proved without a doubt that clean wool production and fibre diameter were quite heritable and it was ignored.”

“Even today there are still people walking around who talk about trueness to type and all the rest of it.

“I have not seen a single dollar ever made successfully out of breeding something true to type,” Mr Le Feuvre said.

“I have never seen a sheep that made an extra dollar through having a ‘sirey outlook’.

“I’ve judged at shows and I can bullshit with the best of them – I mean all those mean-nothing weasel-word phrases that are loved, they mean nothing and they don’t make anything,” he said.

“If the wool industry had adopted genetics when Helen Newton Turner first proved that it was really worthwhile doing I firmly believe the Australian sheep would be cutting at least two kilograms clean more wool than it is today.

Mr Le Feuvre valued visual assessment of sheep for structure and conformation, but believes earlier and wider adoption of Dr Newton Turner’s findings would have meant a plainer bodied flock with a greater resistance to flystrike, worm and lice infestations.

“The first thing you find when you start selecting sheep for clean wool production is you get a plainer bodied sheep that cuts more wool than those concertinas.

“You wind up with a more open-faced plainer animal that is a lot less prone to flystrike.”

He said many of today’s breeders would not acknowledge the value of measurement and genetics, but one of the greatest compliments Mr Le Feuvre remembers getting came from an old sheep cocky after he helped him select some rams.

“He said ‘I’ll say one thing Arthur, that little computer you’ve got there knows how to pick a good sheep eh?”

Genetics and breeding values could be misused, but it offered the wool industry increased productivity, wool quality and the ability to move fibre diameter “anywhere you bloody like”, he said.

“You get more parasite resistance across the board.”

“Had we started selecting sheep on resistance to worms when it was confirmed that it was heritable, people wouldn’t be drenching as much, we wouldn’t have the resistance problems we have today.”

Mr Le Feuvre said the beef, dairy, pig and poultry industries have “grasped genetics with both hands and made enormous progress.

“There is are still a lot of opportunities within the sheep and wool industries for much wider adoption of genetics.

“If I was to be critical of anyone it would be some of the older traditional stud people.”

The great Australian wool industry will only be finished if breeders don’t take up what is available to them and producers should be optimistic, he said.

“Certainly the smart money is on genetics.”

He said it had been convincingly demonstrated that there were sheep resistant to flystrike and worms, and some animals resisted lice infestation. But there were also still too many producers drenching sheep without testing for worms.

ParaBoss is celebrating Mr Le Feuvre’s tremendous contribution to industry, including WormBoss now being 10 years old, by holding a prize draw for new and updated subscriptions to ParaBoss News. Over $2600 worth of prizes are on offer.

Anyone affiliated with the sheep industry can enter the draw, either by updating their existing ParaBoss subscription or by creating a new subscription during July, at www.paraboss.com.au.

“We are offering 9 prizes—$850 Riverina Pasture supplements; 4 x $220 pails of Mouseoff® BD Rodent Blocks from ACTA and 4 x $220 worth of Allflex products—as incentive to spend a few minutes to create a new or update an existing ParaBoss subscription.”