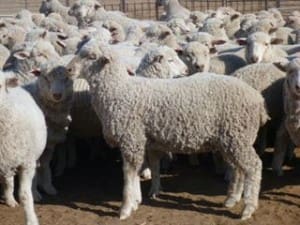 Prices for quality trade and heavy lambs continued to lift across Australia mid-week as seasonal supplies tightened and yardings were dominated by lighter, drier lambs being turned off earlier.

Light lambs suitable for processing were also in demand and restockers were active, though less so on Merino lines. Mutton prices plateaued but any heavy lines offered are meeting strong competition.

Despite the fast-turning season in south-west Victoria tripling Hamilton’s lamb yarding to nearly 38,000, in the first of its split sales, heavy lambs sold $2-$3 up and light lines made $3-$5 more to a big contingent of trade and restocker buyers.

After Thursday’s sales, the NLRS quoted the Eastern States Trade Lamb Indicator at 458c/kg cwt, up three cents and the heavy lamb indice was at 459c/kg cwt, up two cents. The mutton indicator was at 312c/kg cwt, down one cent.

The national indicators also reflected the strong demand for lamb across the categories, except for Merino lambs which suffered the only indice drop. The national lamb rates: restocker 467c/kg cwt, up 6 cents; Merino 376c/kg, down 14c; light 435c/kg, up 1c; trade 457c/kg, up 2c; heavy 458c/kg, up 1c. The national mutton indicator was at 312c/kg cwt, down one cent.

The NLRS said the very good quality yarding included some top trade and heavy weight new season lambs. There was a fair percentage of lighter weights and only limited numbers of old lambs. All the regular buyers operated.

Quality light lambs up $5-$9 at Goulburn

The NLRS said the improved quality yarding included mostly young lambs in good condition, though a significant number showed signs of dryness and light seed contamination. With processor demand subdued, it was a mostly cheaper market of around $5. Local and Central West restockers took advantage of the opportunity, accounting for more than half of the young lambs, including most of the trade categories.

Light young lambs to process were the exception and these met stronger demand to be $5-$9 dearer, although improved quality and condition accounted for some of the improvement. The 16-18kg young lambs made $78-$90 to average 450c/kg cwt. Trade weights to restocking orders made $89-$103. A few heavy weights reached $108 and most of the trade and heavy weights ranged from 420c/kg-440c/kg cwt.

The mixed sheep offering was mostly Merino ewes and a few crossbreds. Demand followed quality and prices were firm to cheaper. Light 1 and 2 score ewes made $28-$36, with medium and heavy sheep from $44-$90 for most of the better covered mutton to average 235c/kg-290c/kg cwt. Restockers paid to $111 for longer wool six tooth first cross ewes.

The NLRS said lamb quality was mixed, with more light weight lambs showing dryness and seed contamination. The usual domestic and export buyers competed in a dearer market. Secondary lambs suitable to restock or feed on were well-supplied, with increased numbers of secondary lambs under 16kg cwt.

Bidding was stronger for well-finished trade lambs and helped lift prices $2-$3. The better-finished light trade lambs averaged $102.90. Medium and heavy trade lambs were in greater numbers and prices were up to $5 dearer to average 494c/kg cwt. Trade weight Merino lambs were in short supply and the better quality drafts suitable for the trade made $83-$97.

Heavy export lambs were in limited numbers and sold $3-$5 higher. Heavy and extra heavy lambs sold from $122-$140.80 to average 444c/kg cwt. Heavy shorn young lambs were in short supply, and a pen estimated to weigh 30kg reached a top price of $135.

Mutton quality was mixed with all weights and grades represented. Merino ewes suitable for the trade were in reasonable supply, and prices were generally unchanged. Medium weight sheep made from $6o-$87 to average from 311c/kg-339c/kg cwt. Heavy sheep were well-supplied and two northern processors keenly contested this category. Heavy ewe mutton made from $82-$104. Heavy wethers with plenty of weight and skin length equalled last week’s top price of $108. Not all buyers operated across the plainer classes and prices were up to $11 lower to average 238c/kg cwt.

In the Hamilton saleyards on Wednesday, the agents yarded 37,867 lambs, 23,074 more than last week. No sheep were yarded in the first split sale of only lambs at the centre.

The NLRS said the penning included very good quality heavy weight export and trade lambs plus lighter stores showing the effects of a fast-finishing season. A full complement of buyers arrived, including a large number of restockers, which lifted demand, although at times this did fluctuate. Overall the heavier weights ranged from 450c/kg-460c/kg cwt, being $2-$3 dearer.

Best trade and heavy lambs firm to $3 up at Horsham

The NLRS said the spring sell-off of young lambs in the Wimmera area was winding down. Quality was again average, with most of the regular buyers operating.

The better presented trade and heavy lambs sold to steady competition to finish firm to $3 up on last week. Large numbers of light lambs were penned and sold to processors and restockers at levels similar to last week. Restockers paid from $75-$86.50 and from $43-$60 for lighter drafts. They went back to the paddock in the north east, local and Kaniva areas.

In the Bendigo saleyards on Thursday, the agents yarded 7962 sheep, 594 fewer than last week.

The NLRS said all the regular mutton orders operated, including an extra processor from interstate who joined the buying field last week. There was a lot of heavy weight sheep in the yarding, especially in the first-cross ewe section, where a high percentage of pens were expected to have carcass weights in excess of 30kg when processed.

In dollar per head terms the market showed a firm to dearer trend, but the extra weight of the sheep meant carcass prices often worked out cheaper when compared to the strong sale of the previous week. The market reached a top of $103 for heavy Merino ewes in a big jacket and $99.60 for extra-heavy crossbreds.

There were only limited runs of light and plain conditioned ewes which mostly sold from $37-$55. Pens of heavy first-cross ewes sold from $80 to a top of $99.60 and averaged over $90 at around 280c/kg cwt. Heavy and trade weight Merino ewes sold from $66-$103, with the top pens averaging $87. These good quality Merino sheep averaged an estimated 300c/kg-310c/kg cwt.

There was only a limited selection of Merino wethers in the yarding, most of which sold from $66 to a top of $98.20. The few rams offered sold from $11-$48.20. This was the last week of the split sales at Bendigo for this spring. The regular combined lamb and sheep sale will recommence on Monday, November 17.

The NLRS said the better quality offering of lambs and sheep sold to the usual trade and processor support. A small number of restockers were active on suitable lines. Overall the market was $2-$4 easier, mainly due to the larger supply.

The NLRS said despite showers in the region and harvest near full operation, numbers lifted 50 percent on last week. Ewe mutton supplies were large with cross bred lambs in reasonable supply, along with store Merino drafts. Quality was back slightly on last week, with more of the ewe supply in light condition and lambs mostly light weight and store categories.

Competition for store categories continued to increase, with restockers very strong and selective live export activity. Processors were more selective and most ewe mutton eased slightly, while the few trade lambs were up around $5-$6. Two major lamb processors did not operate.