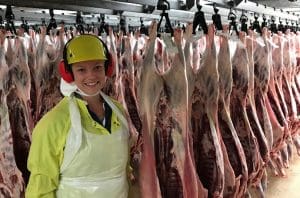 YOUNG South Australian lamb researcher Leesa-Joy Flanagan is keen to continue her studies after winning the 2018 Alltech Young Scientist award at the ONE18 conference recently.

As the undergraduate winner, she received $5000 and a fully funded PhD program at a university of her choice.

The Alltech Young Scientist graduate winner of $10,000 and a fully-funded postdoctoral position is Saheed Salami, representing the University of Catania in Italy. His research investigated cardoon meal as a novel feed and its effect on lamb performance, rumen function, and meat quality.

“These young scientists demonstrate that the future of scientific discovery is bright.”

Leesa-Joy represented the University of Adelaide at ONE18 and her work focused on the effects of different sources of undegradable dietary protein on lamb growth, daily weight gain, and voluntary feed intake.

“My study was conducted as part of my nutrition course in uni, and I was interested in looking at how different ratios of undegradable dietary protein to rumen degradable protein would affect feedlot lamb production parameters.”

She studied 120 lambs on three different diets, one high in RDP/low in UDP and two higher in UDP than RDP.

“For these two diets I used a different protein source to see if this would affect the results at all.

“In the results we found that the diet low in RDP had lower live weight, average daily gain and body condition score.”

Leesa-Joy said between the diets higher in UDP, there was no difference.

“This tells us that the source of UDP does not significantly affect the production of the lamb, which means that producers may be able to save money by buying better available protein, rather than sourcing what is thought to be higher quality, more expensive sources.

“But this is only the beginning of such research,” she said.

“The next step would be to break down the proteins and better look at the differences between them, which we would do by looking at the amino acid profile.

“From here we may be able to develop a product – rumen protected amino acids,” Leesa-Joy said.

“By doing this, we could give that animal exactly what it requires to maximal potential, without spending money on expensive proteins that may just end up stomped into the ground or utilised by the rumen microbes in the gut.”

“When I met my partner Kip, I gained a lot more experience with sheep on his own property in Ngapala, SA.

“But other than through my small farming experience and the involvement that I have had with sheep during my bachelor’s degree at uni (Bachelor of Science, Animal Science), I am just stepping foot into the industry.

Leesa-Joy said the most valuable thing she gained from the ONE18 conference – even before winning the global award — was the networking.

“I was, and still am so lucky to be meeting and talking to incredible people in the industry.

“This whole experience will be one that is invaluable and that I will never forget,” she said.

“Alltech has helped grow my passion for research, that’s for sure!

“With such an amazing offer and opportunity, once I have completed my honours, I would like to continue research and undertake a PhD,” Leesa-Joy said.

“Where in the world is the big question.”

The winner of the new Impact Award was Moisés Poli from Universidade Federal de Santa Catarina in Brazil. His research focused on Pacific white shrimp and Nile tilapia integration in a biofloc system under different fish stocking densities.