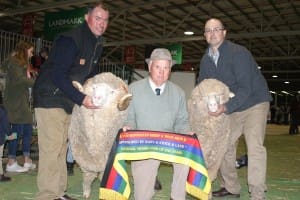 “So to get up this time is very good.”

Mr Sullivan with his two sons, Robert and James, leading the sheep, won the pairs event with their 22.8 micron strong wool ram and 20 micron ewe, both AI-sired by the WA-bred ram East Mundulla 137.

Mr Sullivan said he had been breeding high production commercial Merinos for over 65 years.

“You never quite get there, you are trying to breed better all the time, but we are getting better sheep every year we think.

“We aim as commercial breeders for heavy production sheep – we like big frames and plenty of wool on them and these sheep represent our type very well.”

The Hallett-based stud sells from 600-700 rams a year throughout Australia and has also marketed genetics overseas. The stud’s 2500 ewes cut 8-10 kilograms of 21.5 micron wool annually.

“I never expect anything at the show, I just come along and as long as we’ve got a good team, something we are proud of — and we like to compare them with others of course – if you win it is a bonus.”

Second place in the pairs event went to the Miller family’s Glen Paen Merino Stud from Brimpaen in Victoria. The other finalists in the National Merino Pairs were the Nerstane stud, Woolbrook, NSW; the Wilgunya stud, Dirranbandi, Queensland; the Navanvale stud, Williams, WA, and; the Trefusis stud, Ross, Tasmania.

The grand champion superfine and Merino ram, and supreme Merino exhibit at the Australian Sheep and Wool Show was a 16.7 micron sire shown by the Walton family’s Wurrook Merino Stud at Rokewood, Victoria. Spokesman for the judging panel, Alan McCormack, said it was rare to get a ram with such good coverage of high quality rich, crimpy white wool, including on the belly.

“He is covered right down to his toes, but he is not tending to be woolly on the face.”

“He has a nice, clean and open head.” 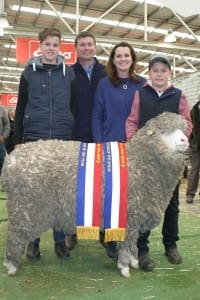 The Miller family, Will, Rod, Sue and Harry, with their grand champion Merino ewe.

Mr Cormack said the wool on the 18.7 micron grand champion fine-medium and Merino ewe shown by the Glen Paen stud was “phenomenal.”