Crossbred wool prices rose 4 percent, coming off their low base as the weaker Australian dollar continues to stimulate the market in general.

As mentioned last week, the wool market tends to be influenced but not ruled by currency movements. The chart below illustrates this.

The rapid rise in 2010/2011 occurred in the face of a 10pc increase in the A$ and the subsequent fall hardly attributed to the neutral move in the currency. This pattern prevails across the decade. 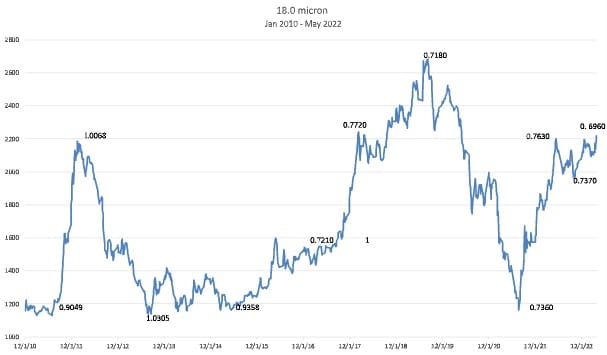 The current price situation has wools finer than 19 micron achieving four and five-year highs this week. This has bought out some nearby activity with growers happy to lock in good levels and exporters happy to hedge some short sales stimulated by uptrend.

Generally forward prices were a little better and volumes slightly improved. Buyers were looking to buy in May/June close to cash. Spring and Summer buying levels remain a little hesitant, with the 19 micron contract pegged firmly at the recent high of 1700 cents. The broader 21 micron contract attracted interest at 1325 cents — a new high for August — but buyers stubbornly resisted the opportunities offered by growers in September and October at 1330 cents and 1340 cents respectively. With the 21.0 micron contract offering historically the best value, this may likely change should the current trend continue.