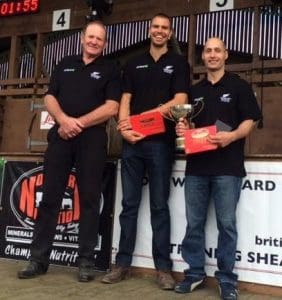 NEW Zealand’s shearing team has continued its winning form on the 2016 CP Wool UK Tour with a big double at the Great Yorkshire at Harrogate, England.

In their third stop on the tour, Hawke’s Bay guns John Kirkpatrick and Rowland Smith beat the England team of Adam Berry and Antony Rooke by 2.85 points to be placed first and second respectively in the Great Yorkshire Show Open final.

The test match was Kiwis’ only international event against England on the tour, the result being payback after Berry and Rooke won last year’s test against Kiwis Dion King and Tony Coster at the Lakeland Shears in Cumbria.

Today’s victories came with two particularly performances from Kirkpatrick who was also the best individual in the test, with trademark quality the telling point after being beaten to the finish by Berry, with just four seconds separating the pair as the Englishman completed the 20 sheep in 15 minutes 20 seconds.

A feature was the closeness of the pen judging, where the four shearers were separated by just 0.35 points. Kirkpatrick’s superior pen-judging points were also crucial in the six-man Open championship final, finishing third in the race with just six seconds separating him from first-man off and Scotland international Hamish Mitchell. Smith was second to finish.

Already on the tour the Shearing Sports New Zealand team had scored a test match win over Scotland at the Lochearnhead Shears, the first by New Zealand at that show in 13 years, and last weekend dominated the Lakeland Shears Open final in Cumbria, won by Smith.

England shearer Adam Berry was first to finish the 20-sheep test match, beating Kirkpatrick off the board by just four seconds. But Kirkpatrick produced clear the best points in judging on the board.

Kirkpatrick and Smith complete the tour with three tests against Wales at Lampeter on Saturday and the Royal Welsh Show and the Corwen Shears next week.