LIVESTOCK theft — one of the most common and costliest threats facing Australian sheep, cattle and goat farmers – could soon be on the decline with the help of a new digital defence.

“Stock theft remains a huge problem in rural communities, as demonstrated in the results of The NSW Farm Crime Survey in 2020,” said co-director of the UNE Centre for Rural Criminology, Dr Kyle Mulrooney.

“It can have devastating financial as well as psychological impacts on farmers but has been a notoriously difficult crime to prevent or correct,” Dr Mulrooney said.

The new technology takes a traditional animal ear tag – commonly used by livestock producers for identification and traceability– and adds specially designed animal monitoring capabilities, with direct to satellite GPS among them, to monitor the animals’ every move.

Smart animal ear tags were one of the crime prevention tools survey respondents indicated they were willing to use to help prevent crime.

“With this new Ceres tag, we feel optimistic that we finally have the technology that will give stock owners more confidence and peace of mind and allow the police greater opportunity to intervene and solve these crimes,” Dr Mulrooney said.

Twenty sheep on UNE’s SMART Farm near Armidale  have been tagged with the new device, worn on collars for welfare reasons, in readiness for a coordinated stock theft recovery event by UNE criminologists in collaboration with NSW Police due to take place on 29 March.

“We’ll be staging a ‘mock’ stock theft by moving stock from the UNE SMART Farm towards the Tamworth abattoirs and we’ll be looking all the time at the quality of the data from the tag as well as the benefits for the police response to the event,” Dr Mulrooney said.

“What we’ll be measuring is the ability of the Ceres Tag to notify the farmer in real time when there is some level of agitation in their livestock, which in a real situation on a farm could be caused by an animal, an intruder, or trespassers trying to muster stock for theft.” 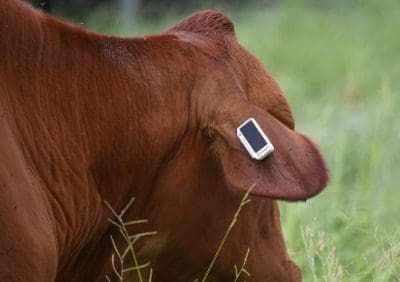 Ceres tag in use

The Rural Crime Prevention Team (RCPT), a dedicated team of rural crime investigators in the NSW Police Force, are heavily involved in looking at ways to increase the use of technology in combating rural crimes.

The State Rural Crime coordinator, detective chief inspector Cameron Whiteside, said the RCPT was continually looking for opportunities to trial technology and identifiers, including the use of GPS devices, to increase the reporting of rural crimes in a timely manner.

The RCPT will oversee the capability of the technology and check the stock as part of a coordinated response.

“It’s really important that we all have this experience with the technology, not just to ensure the integrity of the data, but also to ensure there’s an effective response to the data that’s feeding through,” Dr Mulrooney said.

The Ceres tag’s capabilities introduce a first in the combat for stock theft – the ability to identify who the stolen stock belong to, and effectively return them.

“In the past, it has often not always been possible to work out where stock have come from, even if we know they’re stolen. But these tags will provide all that data, and when properly secured, they cannot be removed without causing serious damage to the animal – which would make it much more difficult to sell them in the legal market.”

“Combined with the NSW Police’s Operation Stock Check initiative announced in 2020 – which provides training for all NSW police to interact with vehicles transporting stock – the use of various and innovative technology will be a major step forward in preventing stock theft in Australia and globally,” Detective Whiteside said.

A unique smart tag on the market

Ceres Tag’s co-founder and chief executive David Smith said the tag’s point of difference lay in its communication via satellite.

“Our tags are the first and only in the world that send information from the animal directly via satellite anywhere, anytime – with data and alerts going straight to the farmer’s mobile phone, laptop or computer. This means they don’t rely on expensive, heavy, time consuming and maintenance-requiring terrestrial networking towers that are limited in range,” he said.

“We also utilise people’s existing software to send the data to them, so there’s no extra software costs. Farmers only need our specialty smart applicator to put the tag on the animal and turn it on. We regard it as extremely affordable and easy to use.”

Ceres tags are available for purchase from anywhere in the world via the manufacturer’s website and e-commerce platform. They are not available for sale via re-sellers.