THE recent decision by some processors to temporarily stop providing basic information such as weekly slaughter numbers raises concerns about the future transparency and competitiveness of the red meat industry, ACCC commissioner Mick Keogh says.

Speaking at a breakfast during this year’s annual red meat industry gathering in Alice Springs this morning, Mr Keogh said he personally thought the decision was short-sighted, and could be detrimental to confidence along the entire value chain.

“The reason given by some processors for not supplying this information, let alone the improvements in market reporting recommended by the ACCC, is that the resulting market reports have been inaccurate, and used by overseas customers to argue for lower prices,” he said.

“If the real issue was the accuracy of weekly slaughter numbers reported by MLA, then it would not seem to be difficult to modify the system to prevent future inaccuracies. But it seems that the real issue is a desire by some processors to limit information flows to both livestock producers domestically, and overseas customers, presumably to improve processor margins.”

What these processors wanted the rest of the industry to believe was that Australia’s overseas customers would pay higher prices if they had less market information, Mr Keogh said.

“If this is correct, then it tells us that these processors are competing for market purely on price rather than on quality. It also assumes that their international customers will be unable to source market information via other avenues, which is almost laughable in its naiveté, given recent developments in digital information and telecommunications.”

If the logic that restricting market information would convince customers to pay higher prices when the market is falling was correct, Mr Keogh said that presumably those same processors would be agitating for increased market reporting next time the market was on an upward trend.

“The decision to reduce, rather than improve market reporting has certainly come to the attention of the ACCC, and will be a focus of the review of progress on the ACCC Beef and cattle market study recommendations, that the ACCC will be conducting in the coming year,” he said.

In a wide-ranging address to producers and other industry stakeholders in Alice Springs this morning, Mr Keogh touched on the challenges behind future industry productivity growth, the need to cultivate investment confidence in the beef industry, and the necessity to maintain competition. 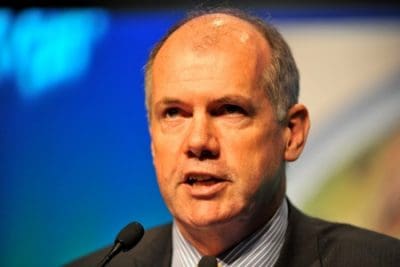 “Competition is a critical factor that drives innovation and associated productivity growth, both of which will be essential to sustain future competitiveness,” he said.

“In earlier times, most livestock transactions in Australia occurred via the saleyards, and various state governments’ maintained market reporting systems that provided market participants with a good understanding of prevailing prices. These market reporting systems were considered an important way to reduce the information imbalance between livestock sellers and buyers, and to discourage anti-competitive behaviour.

“In more recent times, the industry has moved to a much greater reliance on direct sales, with the best estimate being that currently some 90pc of slaughter cattle and 60pc of prime lambs are sold direct, and bypass saleyards.”

This had occurred against a backdrop of continuing consolidation in the meat processing sector, as major processors expand to achieve greater scale efficiency.

Increased reliance on direct sales created advantages for both livestock producers and processors, he said.

“Livestock producers can reduce marketing and transport costs, reduce their exposure to price risk, and gain a more accurate understanding of the processing performance of their livestock. Processors can better manage plant throughput, more accurately target superior livestock, and develop stronger relationships both up and down the value chain,” he said.

“If anyone needs a reminder of the cost associated with producers receiving poor or incorrect market signals, I suggest they study the history of the sheep industry post February 1991”

However, in the absence of comprehensive market reports for these direct sales, there was obviously an increased risk that anti-competitive behaviour could be occurring, or that livestock farmers would make poor production and marketing decisions, meaning the entire market would operate less efficiently.

“If anyone needs a reminder of the cost associated with producers receiving poor or incorrect market signals, I suggest they study the history of the Australian sheep industry post February 1991,” Mr Keogh said.

In overseas livestock markets including the US and Europe, governments have implemented mandatory market reporting, as livestock producers had become increasingly concerned about a lack of transparent market information. In the case of the US, major meat processors are required to report slaughter numbers and prices on at least a daily basis, as well as provide information on by-products and forward market positions.

As many would be aware, the ACCC recently examined the operations of the cattle and beef market in Australia, specifically to consider competition issues.

“While many of the livestock producers we spoke to or received submissions from expressed concerns about the lack of competition and transparency, the ACCC was not convinced that mandatory market reporting, such as occurs in the US, should be recommended for the Australian cattle market,” Mr Keogh said.

The main reason was that unlike the US where the processing sector is highly concentrated, and most cattle are feedlot-finished under forward contract to a uniform weight, there was considerable variation in the type of cattle turned off in Australia, a less concentrated processing sector and less vertical integration.

“This is due to our much greater reliance on export markets, and our different regional production systems. This complicates market reporting, and potentially makes any mandatory system costlier and less accurate – although I note that technology is greatly reducing such costs,” Mr Keogh said.

The ACCC was also aware that a voluntary system of reporting over-the-hooks price estimates and slaughter numbers was operating and managed by MLA, and that this system was likely to be more cost effective and better-suited to industry needs than a government-designed system.

The ACCC did, however, recommend that improvements should be made to market reporting, in particular that actual OTH prices should be reported, and that MLA should better align reports to enable comparisons to be made between OTH and saleyard prices.

“I should note that MLA was undertaking a review of its market reporting systems while the ACCC study was underway, and subsequent improvements to the system have addressed the issues the ACCC raised and reportedly been generally well received by livestock producers,” Mr Keogh said.

Mr Keogh said in his opinion, a more critical issue for the red meat sector to consider was the critical role that information and data would play in achieving the productivity growth needed to remain competitive.

“In a mature industry that does not have the ability to expand by using extra resources such as land, growth is most likely to occur via what economists refer to as ‘capital deepening’ – that is, increased capital investment by existing businesses.

That could take the form of investment in additional fencing, watering points, improved genetics and pasture improvement by livestock farmers, or investments in plant upgrades and new technology by processors, he said.

“Confidence of industry participants will be a key factor that encourages this necessary investment. Critically important factors in maintaining the necessary industry confidence are the transparency of market information, and the robustness of rules governing market behaviour.”

Given the recent period of relatively high livestock prices, some complacency about the need for productivity growth might be understandable, Mr Keogh warned.

However, numerous reports produced by the Australian Meat Processors Corporation and MLA had highlighted that the red meat sector in Australia is a high-cost sector in comparison with virtually all our international competitors.

“In recent times these high costs have been exacerbated by rapidly increasing energy costs, and labour costs remaining persistently high in Australia compared to our international competitors.

There is not much that can be done in the short-term to reduce these costs, which were highlighted as long ago as 1993 in a detailed comparison carried out by Booz, Allen and Hamilton,” he said.

The main ways in which the sector had remained competitive has been through productivity growth, and by developing world-leading integrity systems.

Improving productivity through the entire supply chain allowed the industry to use less labour and energy, while at the same time increasing carcase weights, and improving the yield of high value cuts.

Improving industry integrity systems associated with food safety and biosecurity would enable the sector to promote a critical point of difference between Australian livestock products, and those offered by international competitors, Mr Keogh said.

“More objective carcase information, such as will be available when Dexa technology is deployed in processing plants, has the potential to lift both farm and processor productivity,” he said.

Mr Keogh used a comparison between the productivity performance of the beef and dairy sectors in Australia over the last 50 years to provide an indicator of the gains that may be possible if producers have access to more objective and comprehensive performance data.

If Australian milk yield per dairy cow and average beef cattle slaughter weights were indexed at 100 in 1970, by 2016 the dairy index was at 220 points, while the beef index was at 160, meaning the rate of dairy productivity growth had been double that occurring in the beef industry.

“There are multiple reasons for this, but one is undoubtedly that dairy farmers have available objective milking data, which they can use in combination with comprehensive genetic information to select and breed superior cattle better suited to their farming system,” he said.

“Objective carcase data has the potential to boost productivity in the beef industry to a similar extent, especially by enabling livestock producers to link genetic information and management strategies with objective carcase performance.”

“It also has the potential to ensure that the production and processing sectors can better align with market and consumer requirements, and maintain the premium prices that are currently achieved by Australian livestock products.”

Ultimately, the propensity of the farm sector to make the necessary investments in farm improvements, genetics and technology would depend on the confidence they has in the way that livestock markets operate in Australia, and the quality and transparency of information on which they base their production and marketing decisions, Mr Keogh said.

“If the Australian livestock sector is to grow and continue to prosper in the highly competitive international market environment in which we all now find ourselves, the availability of transparent and objective market and performance data will be critical,” he said.

“That approach is no longer relevant in an era where the right information, shared along the value chain, has the potential to help the sector better compete against beef and sheepmeat from competitor exporting nations, and also against other proteins.”

The choice before the sector was ‘quite stark’, Mr Keogh said.

“It’s a stagnant future characterised by low productivity, uninformed producers and a market characterised by anti-competitive behaviour, mistrust and low levels of investment; or a profitable and growing industry that is innovative, has high levels of investment, and efficient information flows that enable it to successfully evolve to continue to meet consumer needs.”