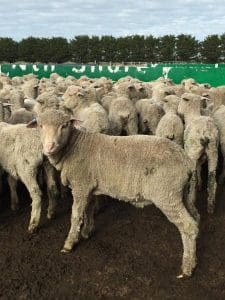 In the first major price movements down in months, at Cowra in New South Wales light lambs sold $10 easier, medium and heavy trades were firm to $7 cheaper and heavy lamb prices fell $2-$5.

The National Livestock Reporting Service attributed the significant increase in lambs to the drier week allowing producers to move stock more easily. Lamb quality was again mixed with lambs showing the effects of the cold wet conditions. There was a handy offering of well-finished heavy and extra heavy weight lambs available. The usual buyers competed in a fairly steady market.

The NLRS said lamb quality was not quite to the standard of previous sales, with more variation. Most were trade and heavy weights, with a limited store lamb offering. The usual buyers operated and competition was reasonable in a cheaper market compared to the very dear sale last week.

The ESDI for mutton finished the week 2 cents down on 412c/kg and the national indicator was unchanged on 411c/kg.

The online selling platform said supply has shortened as the cold winter weather increased across the eastern states, but producers were still hungry to restock flocks.

Ewe lambs dominated the first cross ewe category and restockers pushed up prices to $182-$216, averaging $201. The top-priced line of 180 early February shorn 10-11 month-old lambs were scanned in lamb 152 percent to Poll Dorset rams at Cooma in NSW. The 50kg lambs were mostly score 3. Another 360 in the offering of the same description made $210.

Some stand-out lines of Lambpro composite ewe lambs from Eurongilly in the Riverina sold for $169-$171. The top line of 206 11-12 month-old early January shorn ewes weighed 48.7kg lwt, were score 3, and scanned in lamb 100pc to Poll Dorset rams. Another 412 in two lines of the same description made $169. A line of 140 early March shorn 13-14 month-old first cross ewe hoggets at Noradjuha in Victoria and station-mated to White Suffolk rams sold for $201. The score 2 and 3 lambs weighed 46.2kg lwt.