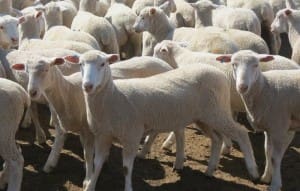 However, restocker lamb rates remained firm or lifted – up to $10 at Cowra on Friday – as store buyers sought supplies.

The National Livestock Reporting Service quoted the main Eastern States Daily Indicators for trade and heavy lambs as losing further ground and chalking up big falls for the week. The other restocker, Merino and light lamb ESDIs finished on Friday either firm or improved for the day, but unchanged or lower for the week.

The national and ESDI for mutton closed unchanged for the week on 312c/kg.

Merino wether numbers were slightly down from last week, but the lamb listing was strong. Wether lambs averaged $66 and a tidy line of Langdene blood woolly wether lambs from Mudgee, NSW, made $82.50. The top price for Merino wethers was $106 for a line of 17-month-old Glanna blood hoggets from Gulgong, NSW, that had a solid 5cm skin.

Other featured sales this week included Cressbrook Surplus Ewe Sale on-farm interfaced online, with 1420 unjoined Merino 1.5-6.5 years selling to a top price of $105 to AuctionsPlus buyers for 500 1.5 year olds with a 4cm skin.

The NLRS said lamb quality improved slightly on previous sales, with fewer plainer lambs. Most were heavy and extra heavy lambs. The usual buyers competed in a cheaper market.

The NLRS said lamb quality was good in the heavy grades, but there were some plainer lines. Most were heavy lambs. Trade weights were in limited supply and a few stores were offered. Although all the usual buyers operated except one, competition reduced, resulting in an easier market.