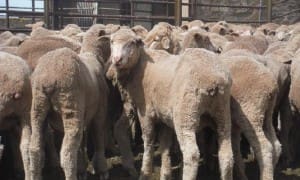 SLAUGHTER lamb prices generally held firm to dearer in saleyards last Friday, as recent rain limited yardings at Cowra and Griffith in New South Wales and at Shepparton in Victoria.

Local restockers also paid to $106 for store lambs at Shepparton, though most young lambs going back to the paddock made $85-$96.

The ESDI for mutton was firm on 333c/kg on Friday, gaining 6 cents for the week, and the national indicator gained 1 cents to close on 331c/kg for the week.

On AuctionsPlus last week, 42,000 sheep and lambs were offered, with store lambs making up the majority of the offering, bolstered by Thursday’s Spring Lamb sale.

Merino wether lambs were also plentiful online last week and many are still selling as unshorn. Prices this week ranged from $46-$94 and averaged $71. The top price was for Barton Hill blood, September shorn lambs out of Burra, South Australia weighing 42kg.

The NLRS said quality of the well-finished trade and heavy lambs was good. Mainly trade weights were penned, along with a reasonable number of heavy lambs and a good supply of stores. All the buyers were present except for one and competition was solid, resulting in a firm to dearer market.

Griffith numbers down after rain

The NLRS said agents reported some lines of lambs were not yarded after 40-60mm of rain in the area. Quality remained mixed, although there were some drafts of better conditioned young lambs sent in from the Mansfield hill grazing regions. The usual buyers attended, but the limited offering of good quality slaughter lambs kept some processors fairly quiet.

Prices for the better quality domestic slaughter lambs were mostly firm to $4 dearer. The market reached a top of $136 for heavy young lambs estimated at around 26kg cwt. The supply of heavy young lambs remained limited and only four pens made above $130-$136. The better quality drafts of trade weight young lambs, 22-24kg cwt, sold from $120-$131 and averaged $125 or an estimated 485c/kg, with select pens making to 500c/kg. Domestic lambs in the 20-22kg cwt range mostly sold from $107-$116 and were also estimated at 480c/kg. Local restockers paid to $106 for store lambs, with most young lambs going back to the paddock at $85-$96.