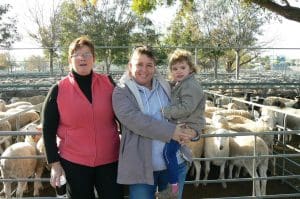 SLAUGHTER lamb prices were generally firm to dearer in saleyards mid-week, lifting in all eastern states markets except at Wagga Wagga in New South Wales due to quality.

Most saleyards increased their lamb offerings on Tuesday and Wednesday, and with Cootamundra and Ouyen putting an extra 17,000 lambs on the market this week, processor buyers were selective in some markets.

After Wednesday’s saleyard sales, the Eastern States Daily Lamb Indicators rose for all lamb categories except heavy lambs. Restocking lambs registered the biggest gain, jumping 10c/kg cwt on Thursday. The ESDI lamb rates are: restocker 626c/kg, up 10 cents; Merinos 566c/kg, up 2c; light 588c/kg, up 4c; trade 593c/kg, up 1c, and heavy 603c/kg, down 2c. The national trade lamb indicator finished the week on 590c/kg and the heavy indice was on 506c/kg.

The national indicator and ESDI for mutton both finished firm on 385c/kg.

Meat and Livestock Australia said the National Trade Lamb Indicator has averaged 527c/kg during autumn this year, 2 percent lower year-on-year. However, it remained 3pc above the five-year average of 514c/kg cwt. Heavy weight lambs eased 3pc to 525c/kg, and light lambs averaged 519c/kg cwt, down only 1pc on year-ago levels. Restocker/feeder lambs lost 7pc year-on-year at 484c/kg. Merino lambs out-performed all indicators – up 7pc to average 514c/kg cwt for the March to May period.

“Autumn 2016 was the warmest autumn on record, and the prolonged warm and dry conditions saw market confidence falter early in the season.

In autumn, eastern states average weekly lamb slaughter was similar year-on-year, at 360,646 head. However, this was still 11pc higher than the five-year average for the period. A surge in slaughter levels in May did little to affect rising prices driven by the rain, MLA said.

“The June to August rainfall outlook points towards a wetter than average winter across most of the mainland, which, in conjunction with anticipated tighter lamb availability and solid forward contracts put out in May for winter delivery, will likely support saleyard prices through the winter months.”

In New South Wales at the Central Tablelands Livestock Exchange at Carcoar on Wednesday, the agents yarded 11,250 lambs, 3450 more than last week, and 2000 sheep, 100 more.

The NLRS said lamb quality improved. There were fewer store lambs and more trade and heavy lambs coming off crops. Most were heavy trade weights and there was a good number of heavy weights. All the usual buyers operated in the dearer market.

The NLRS said overall lamb quality was back a little. Store lambs were still in good numbers and there were plenty of well-finished supplementary-fed trade and heavy weights. Most were trade and heavy lambs. All the usual buyers operated in the slightly cheaper market.

Hamilton’s heavy lamb up to $5 dearer

The NLRS said it was a very good to average yarding attended by the regular buyers. The market remained steady.

The NLRS said the lamb yarding included about 1700 Merinos and quality was good. The usual buyers operating keenly in the generally firm market, with lambs selling a few dollars either side of firm.

Ouyen lambs up to $10 dearer

At the Ouyen Livestock Exchange on Thursday, the agents offered 6822 lambs and 1509 sheep.

Well-finished lambs sold up to $10 dearer than at the last sale two weeks ago, heavy sheep were firm and lighter mutton sold $4-$6 dearer.

In Western Australia at the Katanning saleyards on Wednesday, the agents yarded 6015 lambs, 15 more than last week, and 4000 sheep, 364 more.

The NLRS said prices strong for all categories in the mixed quality yarding due to high demand from buyers.

In Queensland at the Warwick saleyards on Wednesday, the agents yarded 1912 lambs and hoggets, and 1283 sheep.

The market was quoted as firm to a shade dearer for the heavier lambs and firm on all other descriptions within the similar yarding of lambs and a larger yarding of sheep. The top-priced 55.9kg lwt lambs made $162 for Roma producer Tanya Dawes of ‘Barr Park’.