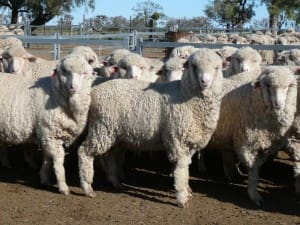 PRICES for the best trade and export weight slaughter lambs held firm in saleyards early this week, though indicators fell slightly with the overall seasonal drop in quality.

Restockers and lamb lot feeders were keen for supplies in most markets, pushing the Eastern States Daily Indicator for restocking lambs up 21 cents to 611c/kg.

With just one day of saleyard sales early this week due to the long weekend, the National Livestock Reporting Service quoted all other ESDIs as falling.

Competition for mutton remain strong, with the ES daily and national indicators at 396c/kg, down about 4 cents.

In SA, the NLRS said light weight and Merino lamb over-the-hook rates were an average of 10c/kg cwt higher week-on-week, while most other categories remained steady. There were upward adjustments to all mutton categories, with medium weight carcases averaging 375c/kg cwt.

The yarding of mutton consisted of several pens of well-finished medium and heavy weight ewes and wethers. Competition was much stronger for all classes of sheep with heavy mutton selling to a top of $137.

The NLRS said lamb quality was average to good, but presentation has dropped off a little. Most of the usual buyers operated keenly in a generally firm lamb market.

The better presented light trade weight lambs sold a few dollars better and some of the heavier lambs easing a few dollars in places. Extra heavy export lambs reached a market top of $202.

Restockers and feeders were again very active and paid mostly from $104-$123 for their replacements, with lighter weights making from $70-$90. There were some large runs of Dorper lambs from the north yarded, which presented well and mostly sold from $109-$142.

The NLRS said a reduced field of trade and processor buyers were active on a mixed quality offering and prices were generally easier across the market.

The NLRS said the dry outlook, cropping commitments, lack of feed and water all pushed numbers significantly higher this week. Lamb supplies were very strong and quality was the best seen for some time, with large numbers of prime heavy and trade lambs available. Secondary and store lamb drafts were also well-supplied. Competition decreased with some processors having reduced throughput and others preparing for maintenance shuts.

Live export competition was lacking but processors, feeders and restockers all managed to secure adequate numbers as prices drifted lower as the sale progressed. Lambs were back $6-$15, with ewes and wethers also slipping at least $6. Light store lambs to restockers sold from $30-$71, with solid numbers of Merino’s available. Light lamb to processors and feeders fell by close to $10 on average, making $65-$103. Trade lamb sold from $85-$121, with prime drafts averaging around 540c/kg cwt. The secondary and Merino lambs made closer to 510c/kg. Heavy lambs sold to a top of $145.50, with the best lambs in excess of 27kg cwt.

Ewe supplies were also solid with some very good long wool drafts available. Ewe mutton prices slipped across the categories, with light weight drafts making $28-$64. The 2 score processor mutton sold from $50-$82 to be close to $6 easier and average close to 300c/kg cwt. Better conditioned and heavy ewes made $65-$97, with wool values helping to keep prices close to firm. Restockers picked up suitable drafts, with prices from $47-$97 including close to full wool drafts. Wether supplies were close to firm with export weight drafts making $75-$120 to restockers and feeders. Lighter and store wethers fell by close to $6 with prices from $55-$90. Ram lambs sold to a top of $103, with live export feeders paying $35-$77.50 for young drafts. Old rams to processors sold from $30-$73 to be firm.