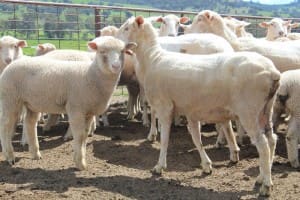 The strength of restocker demand was reflected in light lamb prices, with only 12.1-18kg cwt lines made better than 600c/kg at times in saleyards on Friday.

After Friday’s markets, the National Livestock Reporting Service quoted its Eastern States Daily Indicators for restocker, Merino and light lambs as generally, only losing from 1-2 cents, to post a small loss or gains for the week, in comparison to the faltering slaughter indicators.

The ESDI for mutton finished the week on 326c/kg, down 4 cents for the day and 18 cents over the week. The national mutton indicator closed 5 cents lower on Friday on 326c/kg.

First cross ewes with lambs to $251 on AuctionsPlus

Merino wether lambs sold from $59-$94, to average $76. The top-priced mob were 41kg lwt Kiandra and Calowie blood lambs with a 4cm skin from Bordertown, South Australia.

The NLRS said mainly new season lambs were penned and quality was good for the heavy grades. Mostly trade and heavy weight lambs were offered, plus a few plainer lines. There were more store lambs, but fewer old grades. All the usual buyers operated except one and competition was weaker, resulting in a cheaper market.

The NLRS said 7200 new season lambs were penned and quality was very mixed. There were some good lines of well-finished lambs, along with the plainer, drier types. The usual buyers competed in a cheaper market. New season lambs to restockers sold from $90-$109. Light lambs slipped $12 to average $95. Trade weights sold $12-$15 easier at $107-$126. Heavy lamb prices also dropped significantly to $118-$136. Carcase prices ranged from 481-505c/kg cwt.