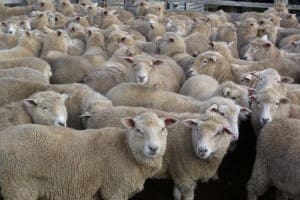 After Friday’s saleyard sales, the National Livestock Reporting Service’s Eastern Market Indicators reflected the lack of interest in restocker lambs over the past week, and the general fall in slaughter lamb rates.

The ESDI for mutton closed firm on Friday at 392c/kg, but lost 6 cents during the week, and the national indice is also on 392c/kg, up 1 cent.

First cross ewes made a top price of $200 for an offering of 360 two-year-old ewes from Dalgety, NSW, which were scanned 183pc in lamb to Poll Dorset rams. A line of 173 rising four-year-old first cross ewes at Inverleigh, in south-west Victoria with 323 marked 3-9 week-old White Suffolk lambs made an outstanding $276, Ms Forster said.

Unjoined Merino ewe hoggets from Hay that sold for $170 were the stand-out offering among the Merino breeders this week. A large offering of scanned proven Merino breeders averaged $99, with the top price of $146 being paid for a line of 280 four-year-old Yanko blood ewes from Barham NSW SIL 100pc to Poll Dorset rams.

The NLRS said lamb quality was generally good. Agents yarded 1300 new season lambs in good condition and the older grades were well-presented, but there were a few secondary lines. Mainly heavy and trade weights were penned and store lambs were limited. All the buyers were operating and competition was easier across all grades.

The NLRS said it was a reasonable quality yarding, with a good mix of trade and heavy weight lambs, plus a fair selection of lighter weights. All the usual buyers operated.

The NLRS said an extra exporter operated on the mainly mixed quality yarding.