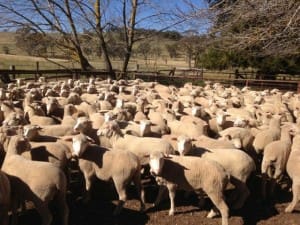 With restocker interest waning as winter approaches, the National Livestock Reporting Service quoted it’s Eastern States Daily Indicator for restocking lambs as down four cents to 560c/kg and the Merino indice as down nine cents to 514c/kg.

The ESDI for mutton finished the week at 360c/kg, down one cent after Friday’s sales and down four cents for the week. The national mutton indicator closed firm on 360c/kg.

AuctionsPlus market operations officer Anna Adams said sheep numbers declined to 43,253, but with prices across all aspects of the sheep market on the rise, clearances were solid.

“As is typical moving through autumn, most ewes offered are scanned in lamb and first cross ewes were highly sought after.

“The top price was for 18 months olds in lamb to the White Suffolk at Bendigo, selling for $212.”

Aged Merino ewes scanned to drop a crossbred spring lamb were also an attractive option this week with lamb and mutton prices skyrocketing, Ms Adams said. This article sold from $93 to a top of $131 for heavy six year old ewes out of Cooma, in lamb to the Poll Dorset. Merino ewe lambs sold from $59-$72.50, and joined maidens made $102-$120.

Ms Adams said very few store lambs were offered, with mixed sex lines approaching killable weights making $110.50-$113, and those requiring more finishing made $102.50-$105.50. With published lamb prices for winter these are still looking like a money-making prospect, she said.

Merino wether prices continued to climb, buoyed by recent movements in the wool market, Ms Adams said, though lamb prices varied significantly with weight and skin. Lambs sold from $36.50 for light lambs in central QLD that averaged $65, to a top price of $110 for May/June drop lambs weighing 44kg with a November jacket.

The NLRS said lamb quality continued to be very mixed, with the yarding containing finished lambs and plainer drier types. Most of the offering was heavy and extra heavyweight lambs. Most of the usual buyers competed in a fairly steady market.

The NLRS said quality continued to improve, with the heavy grades showing top condition. Mainly trade and heavy weights were penned, along with a few secondary and store lambs. All buyers operated and competition was sound, resulting in a firm to slightly dearer market. Light lambs sold to the restockers for an average of $80. Medium and heavy trade weights were $5 dearer and averaged around 600c/kg cwt. The heavy trade weights sold from $126-$146. Heavy weight lambs were firm to a few dollars per head dearer and averaged from 553-594c/kg cwt. A pen of extra heavy weight lambs topped at $195, with an estimated carcass weight of 34kg.

In Victoria at the Shepparton saleyards on Friday, the agents yarded 831 lambs, 196 fewer than last week, and 464 sheep, 45 more.

The NLRS said quality was very mixed, with many plainer finished lambs in small pen lots of just a few head. Not all the usual buyers attended, and the limited numbers and varied quality made it difficult to generate accurate price trends.

The market reached a top of $180 for a small pen lot of extra heavy export lambs. Lightweight slaughter lambs sold from $82-$103 amid solid demand for lambs suiting MK orders. Very small and plain lambs sold from $30-$60, the low price range reflecting poor quality. Bidding for plainer bred and finished domestic lambs fluctuated, and some sales were a few dollars cheaper, with most from $100-$122. The limited pens of better quality slaughter lambs over 24kg cwt sold from $140-$163, with just the one extra heavy export pen to $180. On a carcase basis, the best pens of slaughter lambs ranged from about 560-580c/kg.

The sheep quality was very mixed, with few lines offered. The better quality pens with reasonable carcass finish and weight sold from $80 to a top of $113 for extra heavy crossbred ewes. Two extra heavy Dorper ewes which sold to a local buyer at $143.