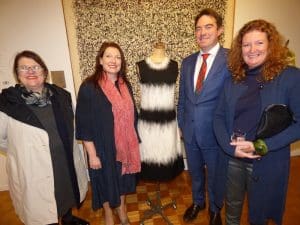 WOOL art was celebrated in the Hamilton Art Gallery this week in a prelude to the annual Sheepvention expo in the western Victorian city – known as the wool capital of the world.

At “The Art of Wool” exhibition’s official opening before wool growers and art lovers, gallery director Sarah Schmidt said the collection of garments and art works demonstrated the enduring fashionable fibre that wool is.

“It shows so well the sophisticated result achievable from woollen fibre and the diversity.”

She congratulated Australian Wool Innovation and the New England Regional Museum for developing the touring exhibition, which is open at the Hamilton gallery until August 7.

Artworks in the exhibition are drawn from NERAM’s extensive collection of Australian art to emphasise the significance of wool in the artistic and design imagination of Australia. The pieces of visual art are complemented by garments from the International Woolmark Prize archives, including creations of young and emerging international and Australian fashion designers.

Southern Grampians mayor and Mirranatwa wool grower Peter Dark said the art of wool was expressed in many ways, including the fibre’s refinement by the eyes and hands of past Merino sheep breeders.

“It was an art form and not many people could do it.”

He said there was also the art of a good shearer who is like “poetry in motion.”

The creation of wool fabric by artisans, especially Italian weavers, is also a real art form that is passed down by each generation, end with the art of the finished garment, he said.

“In many ways wool built this country and as Sara said as well, wool had a very significant in the development of this gallery.”

Mr Cuming said it was thrilling to put the pinnacle of what AWI did – the International Woolmark Prize garments — in front of growers “because a lot of what we do on behalf of you with your levies happens overseas.” He said Australia produces 95 percent of the world’s apparel wool, with 90pc sold in the Northern Hemisphere and only 1pc sold at retail domestically.

“I’ve been saying that it’s the most significant exhibition of woollen and worsted garments to come to Hamilton and no-one has taken me to task on that.”

Sheepvention president Gordon Last said Kevin Sheedy, as well being one of the AFL’s most successful players and coaches, also has an incredible understanding of the issues facing regional Australia and the importance regional and rural communities in driving the economy.

Top sheep and shearers on show

More than 840 sheep are entered in Sheepvention’s Hamilton and Western District Sheep Show this year, with the dual purpose Corriedales listed as the feature breed.

Convenor of the Corriedale section Shirley Foster said while the Corriedale breed has a small show presence at Sheepvention in 2016, the calibre, performance and potential of the breed should not be underestimated.

The Woolshear events will take place in the sheep pavilion, including wool handling, classing and blade shearing competitions, demonstrations and shearing training. The Legacy fleeces will be on display adjacent to the Woolshear area. The junior judging competition for prime sheep will occur on Tuesday.

For the first time the Sheepvention Merino ram sale on August 2 will have a live bidding option for remote viewers provided by Elite Livestock Auctions and a new Sheepvention App will be available for visitors and exhibitors.

On the first-ever ‘Sheepvention App’ people can view maps, program timetables, categorised lists of exhibitors, descriptions and special offers from exhibitors. Finding an exhibitor will be made even easier with the app showing where to go with a red indicator marker. The app is available now for iPhone and android devices from Apple’s App Store or on Google Play, and users can create a short list and map out plans for their Sheepvention visit. A refresh button will provide users with the most accurate listing of exhibitors, events and additional information previously unavailable with a printed program booklet.

For details about other Sheepvention features including the inventions competition, the Coprice Victorian Farm Dog Championships, school events, fashion parades and the Producers pavilion click on this link www.hamiltonshowgrounds.com.au