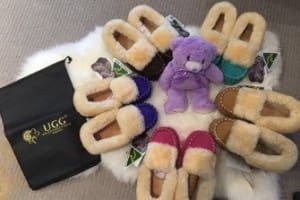 SHEEPSKIN footwear allegedly misrepresented as Australian-made has cost a Sydney-based company a fine of $10,800.

The Australian Competition and Consumer Commission said Kingdom Groups International Pty Ltd (Kingdom) has paid the penalty of $10,800 following the issue of an infringement notice by the ACCC.

The ACCC said it issued the infringement notice because it had reasonable grounds to believe that Kingdom had breached the Australian Consumer Law by making a false or misleading representation on its website about the country of origin of its footwear branded ‘UGG® Aries Sheepskin Australia’.

ACCC deputy chair Dr Michael Schaper said the Australian Made logo is well-recognised and relied upon by consumers.

“The ACCC was concerned that it had been used to give consumers the impression that a product was made in Australia, when it was not.

“Country of origin claims are a particularly valuable marketing tool for businesses, as many consumers place a premium on goods that are Australian-made,” he said.

“In circumstances where consumers must rely on labels to identify where a product is made, it is particularly important that suppliers ensure that any country of origin claims they make are true.”